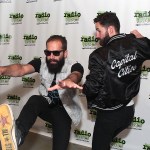 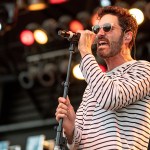 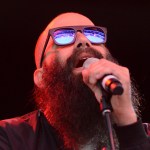 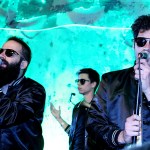 Capital Cities knows how to write a damn good pop song (heard of ‘Safe and Sound’?) and the duo is back after a few years of studio silence. Ryan Merchant and Sebu Simonian stopped by HollywoodLife.com to discuss their much-needed followup to 2013’s ‘In a Tidal Wave of Mystery’, a possible Rick Ross collaboration, and Sebu’s beard.

“We’re working diligently on music right now,” Ryan Merchant tells me. “We have a new album that’s going to be coming out pretty soon.” In the meantime, I asked a bunch of burning questions. This interview has been edited and condensed for clarity.

For your next album, will you change up the sound, or stay in In A Tidal Wave of Mystery‘s lane?

Ryan Merchant: We’re just re-recording all the songs with kazoo instead of trumpet, because kazoo is sexy.

Is a Rick Ross collaboration still on the table?

What’s your advice to humanity?

SS: Drink a lot of water.

What was it like when Safe and Sound blew up?

RM: It happened over such a long period of time. It seems like an overnight thing, but it was a long journey. It’s very exciting when a song starts to do this thing — you start to hit these milestones. You’re getting booked for Coachella, you’re doing TV shows. You start doing all these bucket list rights of passage for a band that’s kind of making it. You get to travel throughout the world. It’s incredible.

RM: Sebu didn’t know about it!

SS: I don’t check his emails.

Sebu has a very impressive beard. What’s the relationship between the band and the beard?

RM: I always keep mine cut. I’m not even gonna mess with that beard.

SS: He’s being humble about it. If he let it go, he could compete with me. I’m waiting for that day so he can take over and I can shave the damn thing off.

Have you ever thought about sticking stuff in the beard?

RM: Yeah, I’ve thought about it.

SS: I store food away for the winter.

What are you watching right now? [Ed. note: I should have been more specific.]

RM: Bird watching. I live by a marsh and there are a lot of birds.

What’s the weirdest or most unique venue you’ve ever played?

SS: My friend’s house. He has a very weird place.

RM: We played a corporate event at the Statue of Liberty once. That was surreal.

Have you met anyone who really made you starstruck?

Any style phases you regret?

SS: No. We’re very hip. Our fashion sensibility is spot on.

RM: That is not true.

SS: I’m going to be regretting this slick-backed hair thing in a few months.