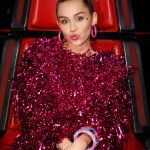 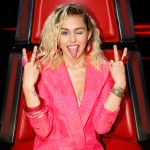 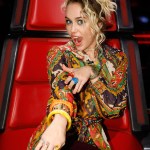 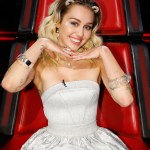 You can always count on Miley Cyrus to rock a totally out-there look, and now that she’s a judge on ‘The Voice,’ we get to see something new practically every week. Relive all the craziest outfits she’s worn on the show HERE!

From the moment she started on The Voice as a key adviser for Season 10, Miley Cyrus, 23, has been showing off her wacky sense of style. To help coach the contestants last season, the singer went ALL-out, rockin’ a tube top with pop out heart shape design and rainbow pants. She paired the look with platform sandals and extensions in her hair, which was pulled up into a high, tight ponytail. Insane!

For Season 11’s Blind Auditions, Miley showed off her country side in an all-denim ensemble, but of course, she had to take it one step further by adorning the whole look with fake flowers. She added flowers to her hair, too, which was styled in two pigtail braids.

The Battle Rounds were up next, and we saw Miley in a few different looks while she coached her team, but the zaniest of them all was for when the artists took the stage. She rocked a bright, printed jumpsuit with her hair in a high bun, and took her makeup to the next level by adding blue eyeliner. Then, while working with her artists during the Knockout rounds, the 23-year-old got some Japanese style inspiration by wearing a purple dress with high neckline and sticks in her ponytail.

Click through the gallery above to check out these outfits and all the others that Miley’s worn so far. And with a month of episodes left to go, there’s sure to be plenty more to come!

HollywoodLifers, which of Miley’s outfits on The Voice has been your fave so far? Are you loving her as a coach on this season of the show.