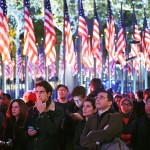 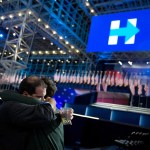 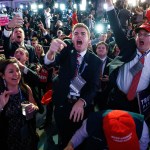 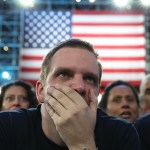 What a big night for Barron Trump! He just became America’s First Son, but he sure didn’t look like he realized the honor as he fought to stay awake during his dad Donald’s early morning victory speech Nov. 9. And did he even roll his eyes as Donald was giving his acceptance speech!?

We totally feel for Barron Trump! The 10-year-old was brought front and center by his father, president elect Donald Trump, 70, shortly before 3 a.m. EST, standing right next to the election winner during his historic acceptance speech. But the late hour clearly took its toll on the youth, as his heavy eyelids kept drooping down while he clearly fought off falling asleep — it even looked like he was rolling his eyes at one point! It didn’t help that his dad gave a fairly lengthy speech where he discussed everything from the election process to infrastructure…stuff that would bore any 10-year-old even at a normal hour.

Barron looked super dapper as his dad’s mini-me, wearing a sharp dark suit and light-colored tie. With his wavy blonde hair he looked like a young Donald and was given such a big position of pride being next to his dad onstage, despite not appearing on the campaign trail during Donald’s hard-fought battle against Hillary Clinton, 68. This is definitely the most we’ve seen of him since his father began his now successful quest for the presidency, and unfortunately for Barron it was when he was at his most sleepy!

We are all Barron Trump. #wtf pic.twitter.com/ufHgAyyCZP

Hopefully once his family left the stage, Barron got some much-needed sleep, as the rest of the family looked ready to celebrate Donald’s presidential historic victory. We’ll be seeing plenty of him over the next four years as we watch America’s First Son grow up in the White House, just like we did with President Obama‘s daughters Sasha, 15, and Malia, 18, before him!

HollywoodLifers, are you shocked by Donald’s victory over Hillary? Do you think he will be a good president?