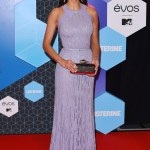 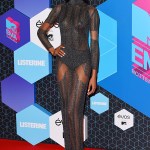 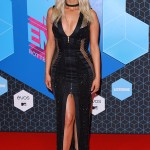 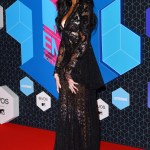 Jourdan Dunn left little to the imagination as she rocked a sheer gown that was one of the sexiest looks of the night at the MTV EMAs. Did you love her daring dress?

Jourdan Dunn, 26, sizzled as she stepped out on the red carpet for the 2016 MTV EMAs in the Netherlands on Nov. 6, where she showed off her model frame in her daring, sheer gown, which allowed her to flaunt her figure, even giving us a glimpse of her chest as she stepped out sans bra beneath the ensemble. While it looks like Jourdan flashed her pasties beneath the sexy style, she oozed confidence as she dominated the red carpet in her latest look. Although the dress featured long sleeves she still managed to show off thanks to the sheer silhouette, which she paired with sleek, straight hair, which appears to be one of the bigger beauty trends of the night as Nina Dobrev also rocked straight locks parted down the middle.

MTV EMAs 2016 Red Carpet — All The Arrivals At The Show

While Jourdan’s red carpet dress was one of the hottest looks of the night, she even managed to fit in a frock swap, trading the form-fitting gown for a sexy, thigh-grazing mini before she stepped out on stage, all while showing off her long legs. Although her two looks were totally different, they had one thing in common — they were both seriously sexy!

Sexy, black gowns and sheer dresses were prominent on the red carpet, with a slew of stylish stars incorporating the trends into their EMAs looks.

We totally loved the way Jourdan took a fashion risk in her see-through gown, but what did you think of her sizzling ensemble for the 2016 MTV EMAs? Was it too revealing for your liking or was it totally H-O-T? Check out her get-up above and see who else dressed to impress at the big show!