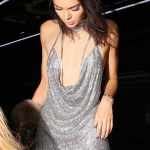 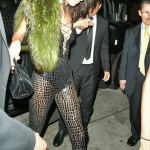 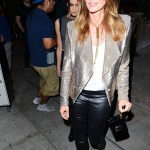 It may have been Kendall Jenner’s birthday, but Kylie Jenner made sure to wear the sexiest outfit of the night! Kylie flaunted massive cleavage in a lacy bra underneath a mesh top, and her leather pants were too hot to handle at Kendall’s 21st birthday party on the night of Nov. 2. Check out the photos!

Kylie, 19, stepped out at Delilah restaurant in Hollywood and grabbed all the attention. The makeup mogul decided to make her cleavage the star of the night in a black lacy bra that emphasized all of her insane cleavage. Her huge boobs were nearly spilled out of her bra top! She wore a sexy mesh top over the top of the bra and lace-up leather pants. Kylie nearly upstaged Kendall on her big day!

Her platinum blonde wig paired nicely with her sultry outfit. Tyga, 26, was also present for Kendall’s birthday party, and he was probably drooling over Kylie’s super sexy outfit. While Kendall swapped her silver sparkling mini for a racy jumpsuit in between partying, Kylie stuck with one outfit the entire night.

Kylie posted a number of hot videos on her Snapchat showing off her outfit. She got close and personal with her cleavage and even posted a video that featured her butt in those tight leather pants!

Kendall’s 21st birthday was the place to be in Hollywood. Family members Kourtney Kardashian, 37, Khloe Kardashian, 32, Kris Jenner, 60, Caitlyn Jenner, 67, and even Kim Kardashian, 36, attended the birthday bash. HollywoodLife.com learned EXCLUSIVELY that Kim, still dealing with the aftermath of her Paris robbery, arrived an hour late and left right after giving Kendall her gift.

HollywoodLifers, what did you think of Kylie’s outfit at Kendall’s birthday party? Let us know!