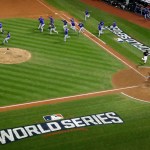 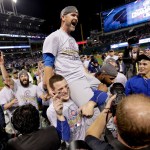 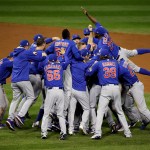 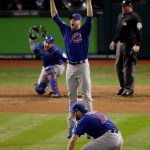 Incredible! In an epic game 7, the Chicago Cubs ended their 108 year World Series drought by beating the Cleveland Indians in the tenth inning after a rain delay — unbelievable. Keep reading for the score and all the details of this amazing game.

What an amazing World Series. After a 17 minute rain delay and 10 hard innings, the Cubs beat the Indians 8-7. With a leadoff home run by Cubs center fielder Dexter Fowler, the Cubs led early and for most of the game. Then, thanks to a 8th inning blast by the Indians’ Rajai Davis, Cleveland climbed back into the game and the score was tied 6-6. Cray.

Slugger Kris Bryant also contributed with a couple of runs for the Cubbies. After a huge home run in game 6, Kris added to his already strong case for MVP of this series with more RBI’s in 7. Addison Russell is also in the conversation for series MVP as he kept the scoring going for the Cubs with a sacrifice fly in the second in addition to his grand salami in game 6. Not to be out done, catcher David Ross blasted a 406 foot solo shot for an insurance run in the sixth putting the Cubs up 6-3. Bravo boys!

This series was not just about the bats as both teams were stacked with talented pitchers like Jon Lester, Josh Tomlin, Corey Kluber and who can forget Aroldis Chapman. Both Cleveland’s starter Corey and Cubs pitcher Kyle Hendricks made it through 5 innings in this game before the managers handed the game over to two great bullpens. Every inning of this game was a tense thriller.

While the Indians were every bit the tough competitor in this series, the Chicago Cubs and their loyal fans were the big story in the 2016 postseason. It has been over 1oo years since the Cubs have won a championship and it has been over 71 years since Wrigley Field hosted a World Series game. The length of time since their last appearance created a heightened sense of interest in not only Chicago, but for baseball fans all over the world and this game delivered on every level.

HollywoodLifers, what do you think of how the 2016 World Series turned out? Are you happy with the Cubs won or are you disappointed? Let us know who you think deserved to win this epic series?