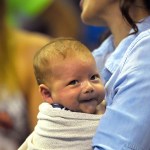 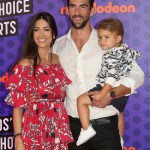 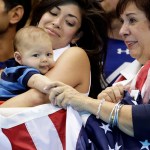 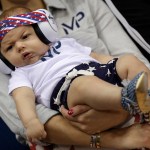 Michael Phelps & his wife Nicole Johnson only became parents 5 months ago, but it seems like they may be ready to add a 2nd child into the mix ALREADY! Hinting during a Facebook Live video that baby Boomer could become a big brother sooner rather than later, Michael totally teased fans about the status of his growing fam — and we are SO psyched!

During the Oct. 27 Facebook Live video, Michael Phelps, 31, answered some of his fans’ most burning questions — including his and his wife’s Nicole Johnson‘s, 31, plans to expand their family! After confirming that he and his longtime love did in fact get married completely under the radar earlier this year, Michael ALSO dropped yet another bombshell — one about a possible baby number two on the way!

“Thank you for the beautiful comment,” Michael said while reading through viewer’s questions during his vid. “Baby number two may be coming soon. Who knows, though?” he teased. Oh come on, Michael, you couldn’t give us ANYTHING more than that? But at least we know a second baby isn’t out of the question! After all, Michael and Nicole seem to be loving parenthood — as little Boomer, 5 months, is practically attached to their hips!

Michael Phelps: See Pics Of Him And His Gorgeous Wife Nicole Johnson

And we love that the adorable newborn seems to be taking to water like a true pro already — like father, like son, right? The Olympian has been bonding with the cutie in the water and sweetly teaching him how to swim because it’s never too early when your dad is a champion swimmer!

We hope Nicole and Michael add to their family eventually, but right now there’s truly no rush! “[Nicole and I] are officially married and now we are getting the chance to kind of kick it and hang out now,” the athlete said during his video. Aw!

Tell us, HollywoodLifers — do you think Boomer will become a big brother sooner rather than later? Or will it take awhile for the Phelps to expand their family?