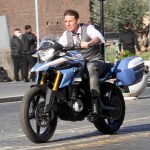 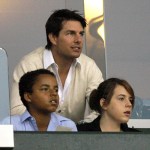 Show me the money! Cuba Gooding Jr. made a surprise appearance while Tom Cruise was reenacting his entire movie career on the Oct. 19 episode of ‘The Late Late Show with James Corden.’ The two co-stars recreated their classic ‘Jerry Maguire’ scene, and it was glorious. Click to WATCH!

Tom, 54, was in the middle of reenacting the famous Jerry Maguire scene, with James, 38, playing Cuba’s character, Rod Tidwell. James gets an A for effort, but he’s just not Cuba. In the middle of Jerry and Rod’s “show me the money” scream-fest, Cuba showed up and reunited with Tom!

The 48-year-old walked up with so much swagger and gave James the eye. He grabbed the phone and told James he was going to the scene right. And that’s just what he did. Cuba and Tom recreated the “show me the money” scene, and it was like we were watching the movie. Cuba even included a little gyrating of the hips! LOVE IT!

Tom reenacted his entire film career with James. From Top Gun to Mission: Impossible to Days of Thunder to Jack Reacher, they went through ALL of Tom’s movies. It was amazing. Tom got really into it. Of course he did. He’s Tom Cruise!

The very personal Tom got very candid about his first kiss. He revealed that his sisters’ friends would come over and practice their kissing techniques on him! “I sprinted home,” he joked. He also told James and Anna Faris, 39, that he had a knack for wandering off when he was a kid. He even “borrowed” his parents’ car when he was only 12! Tom’s always been a daredevil, that’s for sure! Tom’s new movie, Jack Reacher: Never Go Back, hits theaters on Oct. 21.