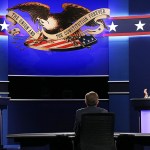 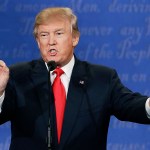 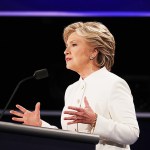 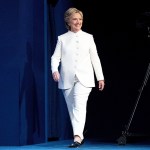 The viral moment of the night at the final presidential debate again came courtesy of Donald Trump, who shouted his way through Hillary Clinton’s two minutes by calling her a puppet. ‘No YOU’RE the puppet” took Twitter by storm. Click through to see voters’ hilarious memes!

Hillary Clinton, 68, and Donald Trump, 70, were in a rousing debate about foreign policy at the third and final presidential debate on October 19, when Hillary went in on the GOP candidate’s seemingly cosy relationship with volatile Russian president Vladimir Putin.

That’s one of the topics that irks Trump the most, and it clearly got to him. Hillary said that Trump would be Putin’s “puppet,” and before she could continue speaking, he interjected multiple times with “No puppet.YOU’RE the puppet!” Obviously, voters watching the debate at home were obsessed with the bizarre moment, and took to Twitter to gawk over it. They shared so many hilarious tweets and memes about the instantly quotable moment:

You're the puppet, no YOU'RE the puppet….. is this real life? Time for another diaper change @realDonaldTrump

Their full conversation was even nuttier than you can imagine. Trump tried to deny that he’s ever even met President Putin, after Hillary poked at his supposed ties to Russia. It unraveled into preschool level taunting extremely fast.

Donald Trump — Pics Of The GOP Candidate For President

“If Russia and the United States got along well and went after ISIS, that would be good. [Putin] has no respect for [Hillary],” Trump said. “He has no respect for our president. And I’ll tell you what, we’re in very serious trouble because we have a country with tremendous numbers of nuclear warheads, 1800, by the way, where they expanded and we didn’t — 1800 nuclear warheads, and she’s playing chicken. Look —

Hillary: Well, that’s because he’d rather have a puppet as president.

Trump: No puppet, no puppet.

Trump: No, you’re the puppet.

HollywoodLifers, whose tweet do you think was the best? Tell us in the comments!