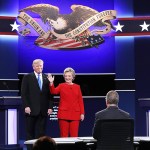 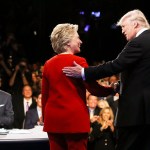 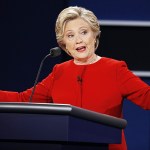 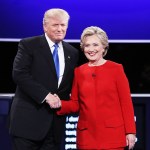 This election has been pretty crazy, and honestly pretty depressing at times. So if you need a little motivation to watch the first presidential debate between Hillary Clinton and Donald Trump, we’ve got you covered. Play our thrilling drinking game, here!

Are you tuning in to the presidential debate where Hillary Clinton, 68, and Donald Trump, 70, will be going head-to-head for the first time on Sept. 26? You REALLY should. We can’t stress how important it is to have a clear understanding of each candidate’s positions before voting in Nov.. However, with all of the mud-slinging, name-calling and horrible comments we’ve heard this year, we don’t blame you for not being thrilled to watch it. So to help you out we’ve decided to make it a little more fun!

If you need a little extra push to turn on the CNN debate hosted by Lester Holt, why not give our drinking game a try? All you have to do is pick a candidate, and take a sip of your drink every time they do one of the things we have listed below! Some of them are guaranteed, like Donald saying “yuge,” and others are less likely, like Hillary mocking Trump steaks. If you want to get REALLY crazy, play both candidates!

Drink when Hillary Clinton:
– brings up any failed Donald Trump business ventures (Trump university, Trunp Steaks)
– mentions Chelsea, Bill, or Bernie Sanders
– say’s “I’m with you” or “love Trumps hate” or “stronger together”
– stops Donald from interrupting her
– calls Donald out for being sexist or racist
– compares herself to President Obama
– coughs

Drink when either candidate:
– rolls their eyes or drops their jaw
– brings up something “more important” instead of answering the question
– says “can I just/please finish?”
– calls the other a liar
– leaves the stage

HollywoodLifers, will you be playing our drinking game with us? Share your thoughts below!