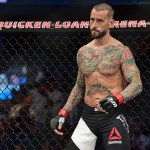 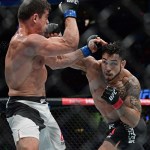 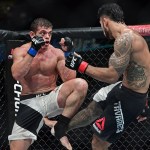 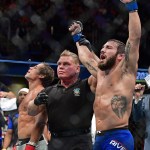 That was epic! It was another magical night in the UFC for 203 in Cleveland, Ohio on Sept. 10, with all eyes on the main event between Stipe Miocic and Alistair Overeem. But only one of these gladiators could win. Congrats, Stipe for the brutal knockout!

Scores of fight fans gathered at the Quicken Loans Arena, normally the home of the Cleveland Cavaliers, to cheer on their hometown favorite and current world heavyweight champion, Stipe in what was a pulsating match-up.

Alistair started off the fight cautiously, using his feet to move around the ring well. That was until he caught Stipe with a sharp fist. And although he did his best to force a submission with a stranglehold, Stipe wasn’t tapping out. But the tide soon changed when Stipe caught Alistair, dazed him and Alistair spent his time trying to avoid Stipe. Stipe caught him again in the first round and his opponent was floored after a missed kick led to an unfortunate slip. As soon as Stipe got on top of Alistair, it was game over. Blows rained in on the challenger’s head and the ref jumped in to call the fight. Stipe is still the champ! Bad luck, Alistair!

Fabricio Werdum was looking to get back to winning ways after losing his belt to Stipe back in UFC 198 against Travis Browne. He started things off with an amazing flying kick, striking Travis square in the jaw. Then, rather bizarrely,  Travis dislocated his finger and asked the ref to pause the fight. Fabricio wasn’t having any of it and went in with a strong punch. Travis survived the first round as he was getting pummeled on the floor. The second round started off slowly, with both fighters visibly running out of steam. Fabricio landed more blows, as Travis seemed to struggle throughout. It was the same again for round 3, with Fabricio eventually running out winner on points by unanimous decision.

Mickey Gall and CM Punk fought out the night’s most intriguing fight, with CM making his octagon debut at 37 after quitting the WWE. Perhaps he should have stayed in wrestling because he was never really in this fight, from the offset Mickey had CM on the floor, fighting for his life. Eventually, in under 2 minutes in round 1, CM tapped out after he was caught in a choke.

In the night’s other fights on the scorecard, Jessica Andrade forced a submission out of Joanne Calderwood, while Jimmie Rivera beat Urijah Faber on points by unanimous decision after taking a nasty jab to the eye.

It’s the first time Cleveland has played host to a UFC event, and judging by the loud support Stipe got it won’t be the last time either! These Ohio fans absolutely love their UFC and it’s great to see the support all around the US for the sport right now. Sure, it’s brutal, but it really is the fastest-growing sport in the world, and deservedly so!

HollywoodLifers, do you think TK deserved to win that fight? What did you think of UFC 203? Tell us below!