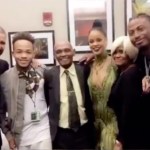 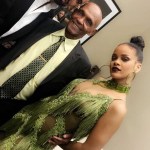 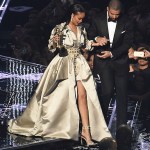 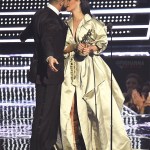 Surprise! After Rihanna stunned the 2016 MTV VMAs by performing four times in a single night, Drake then came out to present the woman he called ‘a living breathing legend in our industry’ with the 2016 MTV Video Vanguard Award! They then celebrated this honor with a kiss!

Rihanna, 28, received more than just the Michael Jackson Video Vanguard award during the Aug. 28 event at Madison Square Garden. She got a sweet kiss from Drake, 29, who came out of nowhere to present her with one of MTV’s highest honors! This was a huge surprise that was capped off with one of the most romantic moments in VMAs history.

Prior to the smooch, Drake professed his love for her with a heartfelt speech that celebrated her incredible career. “Captivating from day one, the iconic being that is Rihanna was already at a place where most artists only dream of going. For them, that’s often the peak, but for her, that was the starting point, and she has kept ascending to an untouchable level ever since,” Drake said.

“What’s most impressive isn’t the endless list of stats, awards and accomplishments. What’s most impressive is the person,” Drake added. “She’s someone I’ve been in love with since I was 22 years old. She’s one of my best friends in the world. All my adult life I’ve looked up to her even though she’s younger than me. She’s a living, breathing legend in our industry.”

She certainly proved that she was “living legend,” performing not once, not twice but four times throughout the 2016 VMAs. It was legendary! The night’s co-hosts, Keegan-Michael Key, 45, and Jordan Peele, 37, even joked that the event was “A Rihanna concert featuring the VMAs.”

The VMAs did promise that RiRi was going to have an “OMG” moment. Talk about an understatement! The show’s producer, Jesse Ignjatovic, let viewers know that RiRi wasn’t just going to accept her moonman and go home. “If we’re talking on Monday the 29th or after the show Sunday,” he said to Entertainment Weekly, “everyone will be surprised with what she’s done to make this honor her own and something that’s extremely impactful.”

It’s obvious that Rihanna has already made an impact – on Drake’s heart! Even before he kissed her at the VMAs, he made sure everyone in Los Angeles knew how excited he was over RiRi’s award. Ahead of the show, Drizzy put a huge billboard that expressed his joy and pride over RiRi. With that sweet gesture, Drake proved that he’s the No. 1 Rihanna fan in the world!

HollywoodLifers – are you glad that Rihanna was given the 2016 Michael Jackson Video Vanguard award? Were you shocked to see Drake come out and kiss her?