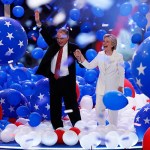 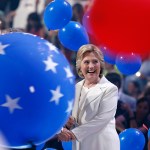 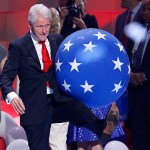 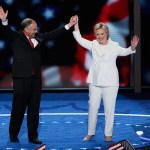 Michael Bloomberg had everyone scratching their heads when he called Donald Trump a ‘dangerous demagogue’ during his DNC speech on July 27. ‘Demagogue’ isn’t a word you hear very often, so what does it mean? Here’s what you need to know.

A “demagogue” is “a political leader who tries to get support by making false claims and promises and using arguments based on emotion rather than reason,” according to the Merriam-Webster dictionary.

The former New York City Mayor, 74, showed his support for Hillary Clinton, 68, by blasting her Republican rival in a scathing speech at the DNC. “We must unite around the candidate who can defeat a dangerous demagogue,” Michael said. While some people may not have known what it meant when Michael called Donald, 69, a “demagogue,” everyone knew it didn’t mean something good.

“Demagogue” was the word of the night at the DNC. President Obama, 54, during his rousing speech in support of Hillary, also seemingly implied that Donald was a “homegrown demagogue.” He said, “That’s why anyone who threatens our values, whether fascists or communists or jihadists or homegrown demagogues, will always fail in the end.”

The theme of the third day of Democratic National Convention was to blast Donald. In addition to President Obama and Michael’s speeches, Vice President Joe Biden, 73, and Hillary’s pick for vice president Tim Kaine, 58, also slammed Donald while up on stage.

Lenny Kravitz, 52, performed an amazing rendition of “Let Love Rule” during the DNC on July 27. Kristen Bell, 36, and Broadway stars like Idina Menzel, 45, Audra McDonald, 46, and Darren Criss, 29, united to sing “What the World Needs Now Is Love,” in honor of the Orlando shooting victims. So far, the Democratic National Convention has been top notch. We can’t wait to see what’s planned for the final night!

HollywoodLifers, what did you think of the DNC speeches? Which one was your favorite? Let us know!