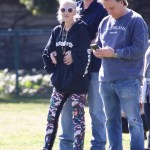 Uh oh! Debra Messing has learned it’s never too late to say sorry after she attacked Blake Shelton over what she believed was a Donald Trump endorsement. She even tweeted at his girlfriend Gwen Stefani to help change his mind. But now she’s eating her words so keep reading for how things got patched up.

Debra Messing, 47, has learned the hard way to not judge someone as a Donald Trump supporter if they happen to not say horrible things about him. She’s now apologizing to Blake Shelton, 39, after she took his comments about the 70-year-old not being afraid to say what he thinks as an endorsement of support for the Republican presidential nominee, and she even dragged his girlfriend Gwen Stefani, 46 into it.

She tweeted to Gwen “Omg. How? @gwenstefani please talk to your man to not vote for the person who will STRIP you of your rights,” the actress wrote for all the world to see. But Blake didn’t endorse Donald and is staying neutral in this election and his fans called her out, causing Debra to issue a Twitter apology on July 28 reading, “Ok – I regret commenting. My passions got the better of me. Sorry. @gwenstefani @blakeshelton. Deb has been at the Democratic National Convention all week so she was clearly riled up during her initial tweet.

The former Will and Grace star got support from her followers, responding to one who told her “Your passion is important Debs. It is clear you have good intentions,” to which the actress replied, “I hope that is known. But I’m human, and make mistakes.”

She added, “He is a spectacular man! I’m a HUGGGGGGGGE fan. My passions got the best of me. I was mistaken to comment,” and Blake being the gracious southern gentleman and responded directly to Deb’s apology, immediately tweeting back, “Thank you sis. I don’t endorse anybody. For this very reason!!” Smart man Blake! So far his lady has yet to jump in to the conversation.

Click here for more adorable pictures of Gwen and Blake

Blake gave an interview to Billboard magazine recently were he said, “In country music, we’re so politically correct and so afraid to possibly upset someone,” the country superstar said. “I’m not going to have a political conversation with you about Trump, or about Hillary Clinton, but I will tell you this: Whether you love him or hate him, he says what he thinks, and he has proven that you don’t have to be so afraid.” Unfortunately, Deb took that to mean he was a Donald fan.

HollywoodLifers, do you wish more celebs were like Blake in not endorsing either candidate? Or do you like knowing where your favorite stars stand politically?