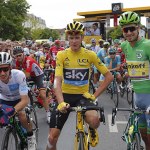 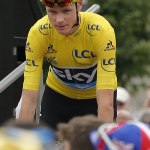 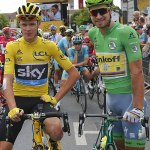 What an achievement! Chris Froome, 31, became the first British cyclist to win three Tour de France titles when he clinched victory in the epic race on July 24, but who is the man they affectionately call ‘Froomey’ on the other side of the pond? Click here to find out!

1. Chris is an Olympic champ too!

Yep! Aside from his sensational performances in the Tour de France, Chris has a Bronze medal at the London Olympic Games in 2012 that he cherishes. He must’ve have a huge trophy cabinet for all his medals!

PICS: See All The Highlights Of The Tour De France 2016

Despite representing Great Britain, Chris was actually born in Nairobi, Kenya! His parents, Clive and Jane moved to the English countryside where he was raised, and must’ve developed his love for cycling on those, long, open country roads! His mom died in 2008, and he dedicated his first Tour de France win in 2013 to her. Sweet guy!

3. Sports runs in the family genes

As often is the case with some of the great sports stars of today, their ability is passed down from a parent. Chris is no different, his father was a hockey player, who represented the England under 19 team.

4. He’s been honored by the Queen!

That’s right, in the official honors list of 2016, Chris was given the Order of the British Empire (OBE) for his outstanding services to cycling. He was presented his medal by Prince William at Buckingham Palace.

5. Chris is a married, family man

Before you get any ideas, Chris isn’t single In fact, he met the love of his life Michelle Cound through South African rider Daryl Impey in 2009, and the pair soon set up a love shack in Monaco. They married in 2014, then a year later welcomed their first child, a boy called Kellan.

HollywoodLifers, are you impressed by Chris winning the Tour de France again? Do you think he’s one of the greatest cyclers of all-time? Tell us below!