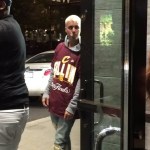 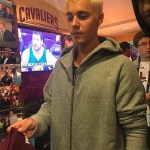 What a night! Following the startling video of Justin Bieber fist-fighting a much larger dude surfacing after the NBA finals, reports of his bad luck continue. The ‘Company’ singer didn’t exactly receive a friendly welcome at the game hours before the brawl.

That’s rough. Justin Bieber, 22, went to cheer for his favorite NBA team in Cleveland, Ohio on June 8 and found himself in a series of unfortunate events. Aside from his street brawl with a man twice his size later that evening, it seems the crowd at the finals also had a bone to pick with the Biebs hours before his scuffle. He was greeted with a loud roar of hecklers, according to several reporters on the scene.

Justin was enjoying the excitement while at the arena — chanting “Let’s go Cavs” and getting in the spirit for the highly-anticipated third game of the NBA finals, surrounded by his entourage and close friends Lewis Hamilton, 31, and 22-year-old Matthias Ginter. He was even photographed wearing one of the free “All In” shirts provided by the stadium. Things seemed to be going well for the award-winning crooner, that is until his face was shown on the jumbotron and much of the crowd realized he was in attendance. The audience responded to Justin with thunderous booes even though he was rooting for the home team. Ouch, that’s got to hurt! At least the cheerleaders still had his back. Despite the negative energy noted in the various tweets, the Cavaliers still won the game against the Golden State Warriors 120-90.

Justin Bieber was shown on jumbotron in Cavs jersey, crowd booed him.

Justin Bieber, supporting the home team in his Cavs T-shirt, nearly had his eardrums booed off by Cleveland fans

He's wearing a Cavs shirt, but there were still boos for Justin Bieber. #NBAFinals #ALLin216

Honestly not sure what I like more: the Cavs winning or 20,000 people booing Justin Bieber. Cuz that just happened.

The “No Sense” singer apparently wasn’t flattered by his less than welcoming response from fellow Cavalier fans. To make matters worse, Justin was spotted getting roughhoused outside of his hotel around 11pm later that night in a video obtained by TMZ. The clip started with the singer getting face-to-face with the much larger man, quickly escalating after Justin received a light blow to his head, causing the Biebs to full on deck the other guy in the face. As the recording ends, we see Justin pinned on the ground with others trying to intervene as he goes down.

Considering the animosity at the game, Justin may reconsider returning to the Q for game four of the NBA Finals although he is currently on a break from his Purpose World Tour. It’s questionable as to whether the controversy started due to some sport related trash-talking, ample photo requests or simply a dislike for the pop star. Luckily, Bieber fans can breathe a sigh of relief because he shared two different filters of the same black-and-white selfie showcasing his unscathed face on June 9 with the caption, “Not a scratch on this pretty boy.”

HollywoodLifers, how do you feel about the crowd’s response to Justin Bieber at the Cavaliers game? Let us know!