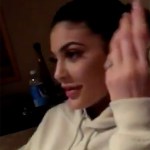 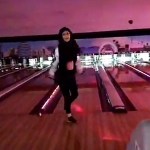 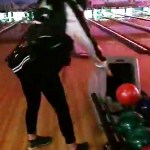 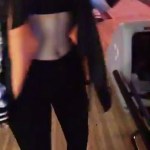 So sweet! Kylie Jenner couldn’t help herself and hugged her new boy PartyNextDoor while on their May 26 bowling date. Click to see the adorable PDA photo!

Kylie Jenner, 18, sweetly wrapped her arms around new love PartyNextDoor, 22, in an all-new photo. The PDA action went down on May 26, when Kylie and the rapper went out bowling together with friends in Los Angeles. Tyga, look away now!

Kylie took a moment out of her fun night out at Pinz Bowling Center to hug her new man. The new couple has been very private about showcasing their affections for one another, but Kylie couldn’t miss out on a opportunity like this one. Kylie was still looking at her phone, but her right arm was hooked around his neck. CLICK TO SEE THE PIC!

Kylie looked super cute in a silk bomber jacket. PND kept it casual in a black T-shirt. PartyNextDoor had posted Snapchat videos of his date night with Kylie. He even took a video of her bowling. Shockingly, he ended up deleting the videos.

One day after their date, Kylie and PND spent more time together. She seemed to be a little upset that he deleted those Snapchat videos. “I’m protecting you,” he said. Kylie’s been wrapped up in drama with her ex Tyga, so PartyNextDoor may have just been reassuring Kylie that he’s going to be there for her!

PartyNextDoor has had his eye on Kylie for months now. He reportedly started to pursue two months ago, while she was still dating Tyga! Tyga and Kylie are now over, and PND’s finally getting his chance with Kylie!

HollywoodLife.com learned EXCLUSIVELY that Kylie has been sending her ex pictures of herself and PartyNextDoor in an attempt to make Tyga jealous. It’s working. Tyga has blocked her texts! Seeing this sweet PDA photo probably won’t make Tyga too happy! Maybe that’s what Kylie wants!

HollywoodLifers, do you think Kylie and PartyNextDoor make a cute couple? Let us know!