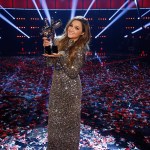 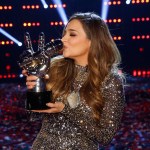 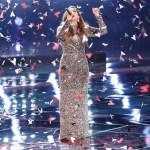 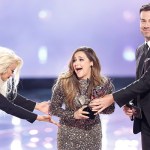 The time has come — we finally know who the winner of ‘The Voice’ is! But there was a lot of fun to be had in the two hour finale first, and we have a full recap of the whole thing. Keep up with everything that went down, and, of course, find out who won, right here!

Who’s it going to be — Laith Al-Saadi, Alisan Porter, Hannah Huston or Adam Wakefield?! Only one of these incredible singers can win Season 10 of The Voice, and after two hours jam-packed with performances and guest appearances, we finally know who it is. WARNING: SPOILERS AHEAD!!!!!!!!!!!

And the winner of Season 10 of The Voice is……..ALISAN PORTER, meaning FINALLY a female coach has won! Congrats to both Alisan and her coach Christina Aguilera!

Read on to find out everything that went down before the exciting announcement was made!

To kick off the show Little Big Town takes the stage to perform their brand new song “One of Those Days.” Their upcoming album was produced by Pharrell, and it was so great to see him singing along while watching the country group do their thing!

Next, finalist Hannah, from Pharrell’s team, takes the stage, and she’s joined by a familiar face at The Voice — former coach, CeeLo Green! The two perform an awesome duet of his song “Crazy,” and Hannah proves once again just why she’s made it so far in the competition.

The best part of the finale episode is when the finalists bring back their best friends from throughout the season for a performance, and Alisan is the first to do so tonight. She asks Kata Hay, Paxton Ingram and Ryan Quinn to join her on stage, and they sing an incredible rendition of “Straight On.” Their voices are all SO different, but came together beyond perfectly!

Laith is next to take the stage, and it’s a dream come true for him, as he gets to perform with rock and roll legend, Joe Walsh. The guys rock out on their guitars and sound amazing singing Joe’s hit “Rocky Mountain Way.” Could there BE a more perfect pairing?!

This episode is literally jam-packed with performances, and the next is from Sia, who sings her brand new song “Cheap Thrills.” As usual, she covers her face with a wig and giant bow, keeping the attention on her three incredible dancers — one of which is Maddie Ziegler from Dance Moms, of course. SO much talent on one stage!

Another finalist gets his chance at a dream duet next, as Adam sings alongside Alison Krauss. They duo gives a gorgeous performance of “Willin” by The Little Feat, with her on the fiddle and him on acoustic guitar. It’s literal country music perfection!

Hannah gets to bring her besties from the show back next, and she chooses Bryan Bautista, Brian Nhira and Caity Peters for a rendition of “When We Were Young.” While Bryan was just eliminated last week, it’s been weeks since we’ve seen Brian and Caity, so this was a total throwback…and beyond amazing.

The next performance is highly-anticipated — despite rumors that he had canceled just hours before show time, Zayn Malik shows up to sing his new single “Like I Would.” Obviously, he sounds (and looks) absolutely amazing, proving that leaving One Direction to go solo wasn’t a bad choice!

Coach Blake performs next, entertaining the crowd with the new song “She’s Got A Way With Words” from his album If I’m Honest. Blake has been promoting this record like crazy — he just performed on the show with Gwen Stefani last week! — but with so many great songs, we’re not complaining!

For his Bring Back performance, Laith selects Katie Basden, Owen Danoff and Shalyah Fearing, all fellow Team Adam members, for a rendition of “Georgia On My Mind.” Unfortunately, Owen is sick and can’t make it, but the rest of the singers’ voices are all SO powerful, and they come together perfectly on the track.

Alisan gets her chance to duet with a star next, and she and Jennifer Nettles get together for a performance of the country superstar’s hit “Unlove You.” Country music isn’t even Alisan’s genre, but she can do it all, and the ladies sound absolutely gorgeous together.

It’s Adam’s turn for a Bring Back next: Mary Sarah, Nick Hagelin and Justin Whisnant are the three artists he chooses to join him for “Give Me Some Lovin’, and it’s a total country-fest! Even though Nick isn’t a country artist, he proved he has a little of it in his blood by singing a Blake song earlier this season, so he fit in just fine. Love it!

Next up is an epic pairing: Christina joined by Ariana Grande. I mean…does it get any better than that?!!? The ladies duet on Ari’s songs “Dangerous Woman” and “Into You,”and there are no words to describe how unbelievably awesome it is!

Finally, it’s time to get to some results, as Carson Daly reveals we’ll now learn who’s in fourth and third place. In fourth, it’s Team Adam’s Laith Al-Saadi, while Hannah Huston from Team Pharrell takes third. But it’s certainly not a journey for either of them to be upset about!

With Alisan Porter named as the winner, that means Adam Wakefield takes second place. What a season that was!

Listen to more amazing talent from The Voice HERE on iTunes!

Who do you think should win The Voice, HollywoodLifers?