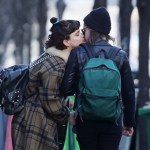 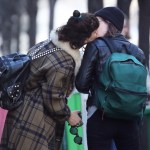 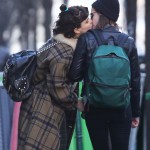 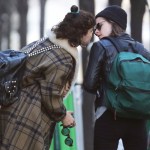 This is awkward. Kristen Stewart and Soko must think alike, because both of them attended the same Cannes Fest party. Yikes! Did the exes manage to avoid each other or was their run-in a disaster?

It’s a little hard to move on from a past relationship when your ex shows up to the same event as you! Kristen Stewart, 26, and Soko, 30, both attended a Cannes Festival party in France on May 13. It’s been a few weeks since their break up, but seeing your ex at an event isn’t exactly the awkward encounter you want. See what happened here!

The exes arrived at the Tetou Restaurant  for the Vanity Fair bash separately. Kristen wore a black and white outfit, with lace detailing on the blouse, and dark, red lipstick that accented her platinum haircut.

Soko, similarly showed up in a vampish outfit, wearing black and white with a light blue flower for a pop of color and a pair of super punk, platform shoes.

Although there is no sign that the couple bumped heads during the night, it’s a little weird to know your ex is only a few feet away from you. Plus, Kristen and Soko practically just broke up so the wounds are probably still fresh.

The couple reportedly broke up in May 2016 after only a few months of dating. The reason was never revealed, but the breakup coincidentally happened right around the same time Kristen ran into her ex, Robert Pattinson, 29, at the Met Gala! Kristen just can’t catch a break with these awkward situations.

Although her run-in with Rob and his new lady, FKA Twigs, 28, was supposedly pleasant, you have to wonder if that reunion put a strain on the Twilight actress’s relationship with Soko.

Before that, the couple were inseparable. They were often seen holding hands while grabbing lunch. Soko even told W magazine that she was “so in love” with her girlfriend in March 2016. So sad!

But despite their split, there may be a chance the two get back together, according to the Daily Mail. And that reconciliation may come sooner than later being that the two are both in France. The former couple were often spotted showing major PDA in the city of romance. We’re not sure how close these two are to rekindling that old flame, but we’re just glad this situation didn’t get any more awkward than it needed to be.

HollywoodLifers, what do you think would’ve happened if Kristen and Soko ran into each other?