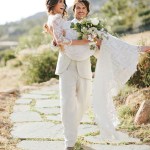 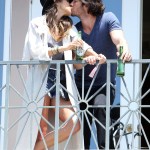 A baby Somerhalder might be on the way! Although 27-year-old Nikki Reed has been busy partnering with Kiehl’s, and her hubby, Iam Somerhalder, 37, has had his hands full with ‘The Vampire Diaries,’ the couple has STILL found time to baby plan. Read on for their exact words on starting a family together!

Ian Somerhalder and Nikki Reed have been vocal in the past about how excited they are to start having kids. Turns out, that time may come a whole lot sooner than any of us thought! With Nikki revealing that the couple still have babies on the brain, who knows how soon it could be before she’s officially expecting. After all, Ian has even stated that “babies are the coolest little things in the world.” How sweet!

When asked at the Kiehl’s annual Earth Day event about her and Ian‘s plans for starting a family, Nikki revealed to E! News, “I’m sure that’s in the cards.” And while we acknowledge her words in no way mean that she and Ian will announce a pregnancy as early as tomorrow, it IS exciting to hear that the couple still have dreams of raising babies together. After all, it was only in February that Ian revealed to Entertainment Tonight that he LOVES kids.

“Well, you know, [babies] are the coolest little things in the world,” the Vampire Diaries hunk gushed. He also informed the outlet that he and Nikki are “absolutely” working on having babies right now! Crazy, right? We really hope they get to it. I mean, can you just imagine how adorable their children would be?

But although earlier this year Ian was enthusiastic about the prospect of welcoming a child into the world, and Nikki has since confirmed that babies are in fact on their radar, an inside source has informed HollywoodLife.com EXCLUSIVELY that the couple won’t actually be having kids in the immediate future.

“Babies are going to be a part of Nikki and Ian’s life but not anytime soon,” our source revealed. “They like living their lives as a couple and are not ready to add anyone else to that. They are focused on career goals and being a couple only right now.” Oh well, baby or not, we still LOVE Nikki and Ian together! And we’re sure they’ll start a family on their own time, when it’s right. Honestly, we cannot wait!

Tell us, HollywoodLifers: would you love to see Nikki and Ian have a baby this year?