After the blindside last week, the control was totally up in the air — just like Tai. Did he stay with the guys this week (the bullies, as I like to call them) or did he head over to the ladies’ side?

The dynamic duo on Survivor: Khao Rong — namely Scot and Jason — have given Russell Hantz a run for his money. Of course, this week started with them, along with Tai rejoicing after they got out Debbie last week and kept the super idol. However, it won’t be long until everyone sees they have to get rid of them… right?

The first challenge was pretty intense from the start — it was actually three different groups; you could chose to play for love (a letter from home), food (a burger, fries and a beer), or an advantage.

The only two who played for love were Joe and Julia — the oldest and the youngest; Joe dropped pretty quick though so Julia got her letters. Scot, Jason and Michele went for food; but both “strong” men actually dropped quickly and Michele won the food! So yes, Tai, Cydney and Aubry went for the advantage and actually lasted the longest. Surprisingly, Cydney was out first and it ended up being Tai who won the advantage. It ended up being an extra vote. Ugh, it’s tough as a fan; Tai’s a favorite, but I’ll never root for the alliance he’s on at the moment.

So, how can the girls take out the guys or get Tai on their side? Julia’s idea was for them all to vote for Tai; that way, the guys will have to use the super idol to save him. But Aubry’s not so sure, so she told Tai that the girls were gunning for their idol and she would be willing to work with them; Tai basically adores her, so he brought that idea to Scot and Jason. No surprise here: they completely disregarded what he said and decided they wanted Cydney out.

At the immunity challenge, the players had to prove their upper body strength. Here’s the order of who went when: Joe (first again), Scot, Julia, Tai, Michele and Cydney; Aubry and Jason were the final two up there for nearly 90 minutes — but Jason ended up winning.

Afterward, Julia went back to being double agent and Jason and Scot told her to come to their side and they’d bring her to final three, since eventually they needed to vote out Tai. I mean, come on girl you can’t believe that!

At tribal, the votes were split — 4 to Scot, 2 votes Tai, 2 votes Aubry. So, we an all assume Tai would add his idol to Jason’s for the super idol, but Tai flipped last minute and said no. Yes, this is real. Scot went home! The best part? Jason had handed his idol to Scot to prove his loyalty before tribal, thinking that Tai would combine it with his; so yes, Scot went home with Jason‘s idol! (Read what Scot had to say about the blindside in our exclusive interview!)

Make sure to comment below if you’re as shocked as I am! 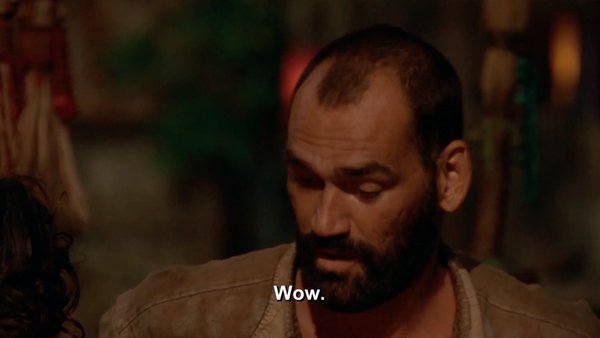