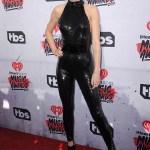 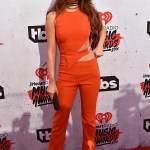 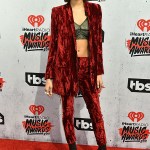 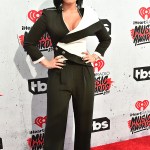 Has Iggy Azalea already forgiven Nick Young for cheating? The starlet showed up to the iHeartRadio Music Awards still wearing her engagement ring! Looks like there’s hope for this couple!

Iggy Azalea’s had a rough week, but she was still rocking her engagement ring from Nick Young, 30, at the iHeartRadio Music Awards on April 3. Nick and Iggy, 25, have been in the middle of a major scandal after Nick admitted to cheating with a 19-year-old.

Iggy made one hell of a statement by rocking the red carpet wearing her $500,000 engagement ring from Nick. The rapper looked gorgeous in a crop top and blue pants. She may have had the engagement ring on, but Nick was nowhere in sight. To hear more about Nick and Iggy, head over to iTunes and download the latest HollywoodLife podcast for free!

Nick turned Iggy’s world upside down after a D’Angelo Russell leaked a video where Nick confessed to cheating on Iggy with a 19-year-old girl! In her own way, Iggy thanked D’Angelo for revealing Nick’s dirty little secret. But she also wanted more proof of Nick’s unfaithfulness so she could decide if she should call off the wedding. Well, that engagement ring proves that the wedding is still on!

HollywoodLife.com learned EXCLUSIVELY that Nick has been trying to get back in Iggy’s good graces since the cheating scandal started. “He knows Iggy is mad and he is trying to get back on her good side, and has been constantly apologizing to her,” a source told us. “It is really not good for Nick right now since he has to save a relationship that was perfect only a few months ago.”

Iggy is performing for the first time since the Nick drama, and it’s sure to be her most difficult performance yet. Stream her music HERE! Thankfully, her BFF Demi Lovato will be in the audience cheering her on. We found out EXCLUSIVELY that Iggy’s been leaning on Demi since she found out about Nick’s cheating.

HollywoodLifers, do you think Iggy should stay with Nick? Let us know!