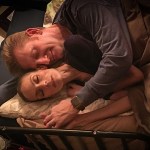 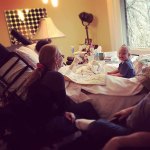 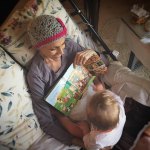 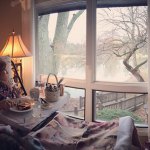 Rory Feek shared more insight into his life since beloved wife Joey’s death from cervical cancer, posting a heartbreaking photo of her gravesite to Facebook. The new widower isn’t losing hope during these dark days.

Rory Feek, 49, took to his Facebook page on April 2 to share a devastating, but beautiful photo of Joey Feek‘s grave on their farm in Tennessee. The photo was captioned with an inspirational quote, that made it clear Rory’s not giving up even though he’s missing his wife so much.

“…a bright sunrise will contradict the heavy fog that weighs you down,” Rory captioned the gorgeous, but haunting photo of the sun rising over his sprawling farm. Joey’s simple grave, topped with flowers and a wooden cross, is illuminated by a ray of sunshine as two ponies play nearby. It’s breathtaking.

The sweetest part of this photo is that Rory was out visiting the gravesite before sunrise. Poor thing. Rory and daughter Indiana, 2, have actually been visiting Joey’s grave frequently, as he revealed in a blog post on Easter Sunday. He wrote that Indiana doesn’t quite get that mama’s gone yet, but he’s been taking her out to the little cemetery to see where her mother’s been laid to rest.

“We make the walk or ride into the backfield, to the spot where Joey rests and we sit down beside her temporary wooden cross.  I talk with my bride about what has happened that day, and what I’m worried or excited about… and I share the latest thing that Indiana is doing,” he wrote on March 27.

Rory has been candid about each and every step of Joey’s cancer battle. That included blogging about her private funeral and public memorial service in her hometown. Joey was incredibly loved by everyone she met! She faced unimaginable struggles in her final months, and Rory believes that she’s in a better place now. Rest in peace, Joey!

HollywoodLifers, were you moved by Rory’s post? Tell us in the comments!