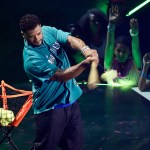 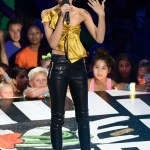 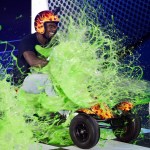 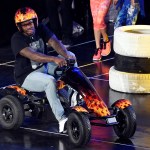 Oh nooo! Poor Fifth Harmony got their spiffy Kid’s Choice Awards outfits totally ruined when they were surprised by a big ol’ batch of that famous green slime! It might be a big bummer for them, but it’s our favorite part of the KCA’s! Here’s the scoop.

Sorry Fifth Harmony, but you’ve got to expect some slime at the Kids’ Choice Awards! The girls looked shocked when they were showered with the green, slippery liquid on Mar. 12 after they received their Favorite Music Group award at the notoriously messy award show. This might be one of our favorite moments from the whole night! We have all the slimy details, right here.

Slimed! Fifth Harmony found out about the Kids’ Choice Awards most honored tradition the hard way on Mar. 12, when they were blasted with the green gunk. It may be messy, but they sure looked like they were having a ton of fun!

Rob Gronkowski and Dove Cameron presented the girls with their award for Favorite Music Group, and then quickly backed away because they knew what was in store. The gals were giving a sweet speech about how thankful they are for their wonderful fans, but the second they finished they were totally blasted with slime shooting out of the floor!

We felt bad that their outfits and perfect hair and makeup got ruined, but they didn’t seem to mind one bit. Especially not Ally Brooke, who just stood in the path of the slime with her head covered while the rest of the girls screamed and ran away! We loved every second of the sliming! The girls were the second of the night, right after John Stamos, whose surprise slime-bombing was just as epic.

HollywoodLifers – were you glad that Fifth Harmony was the one who got slimed? Share your thoughts with us!