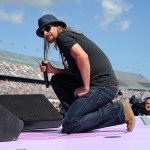 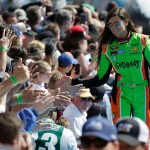 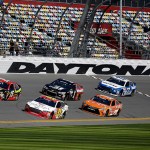 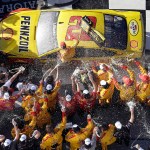 Ready. Set. Race! The Daytona 500 opens the NASCAR Sprint Cup Series, with the likes of Dale Earnhardt Jr., Joey Logano and Chase Elliot all battling to be champion on Feb 21 at 1 p.m. EST. Will Dale win his third Daytona 500? Or can the rookie Chase continue to surpass all expectations? Click here to see the live stream!

It’s one of the biggest and most watched events in the US sporting calendar. The Daytona 500 is the season opener for the NASCAR Sprint Cup Series and it begins this weekend at the Daytona International Speedway in Daytona Beach, Fl. Can Dale Earnhardt Jr., 41, win his third Daytona 500 title? Or will defending champion Joey Logano, 25, repeat last year’s success. Click down for the live stream and you will see!

It’s sure to be a great race as always, with 22 drivers competing over 200 laps on the 2.5-mile (4.0 km) asphalt superspeedway. That means these drivers will be looking at completing 500-miles at a top speed likely to exceed 200 mph — just simply WOW!

Chase Elliot, 20, sits in pole position for the big race, which makes him the youngest in Daytona 500 history to have achieved such a feat. He recorded an incredible 196.314-mile-per-hour lap in qualifying on Dec. 14 and is just ahead of Dale who sits in a respectable second place on the grid.

If 2015 Daytona 500 champion Joey, 25, has any aspirations of regaining his crown, he’s got some work to do because he starts on the grid in seventh spot. He also can’t let his on-going feud with Matt Kenseth distract him. The pair got into a series of spats that ended with a crash at Martinsville Speedway during the Chase for the Sprint Cup. The crash meant that Joey was eliminated from title contention.

However, Joey claims he and Matt have cleared up their issues with each other. “Well, we didn’t throw any punches,” he said during NASCAR’s media day on Feb. 16. “No, we are fine. I would say we are at a neutral spot. To be honest with you, what we talked about at Homestead last year I felt like I got everything off my chest and hopefully he did. I don’t know if he did or not but I feel like I have a clear conscience and I am moving forward.”

We’re sure there’s bound to be plenty of fireworks when all these drivers hit top speed, and the likelihood of a few crashing out early on will definitely provide entertainment you won’t want to miss. There’s also bound to be a ton of celebrities — like Ben Affleck who is one of many famous faces that have watched the big race in the past.

HollywoodLifers, who do you think will win the Daytona 500 Sprint Cup Series? Will Dale win his third Daytona? Or will returning champ Joey regain his title? Let us know below!