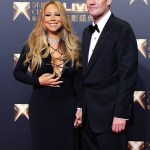 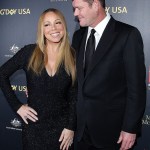 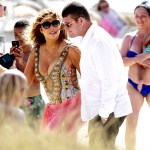 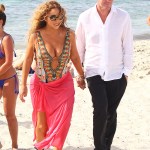 Rich people problems! Mariah Carey’s stunning 35 carat diamond engagement ring from billionaire James Packer is so massive and heavy, she claims it’s putting a strain on the singer’s ability to lift her left arm. Oh man, we only wish we could know what that felt like!

Oh Mimi! We love us some Mariah Carey because sometimes she’s just so over the top with the standards that come with her luxe lifestyle. While doing press for her upcoming international tour, she showed off her jaw dropping $10 million stone to interviewers and noted that “It’s a nice chunk.” WHAT?! Man she’s got some high demands, because that’s one of the most giant diamonds we can ever remember seeing on a celebrity’s finger. Yep Meems, it’s definitely a nice”chunk!” Read on for more about what she said about her ring, as well as her upcoming wedding to James Packer.

When it comes to the weight of the giant 35-carat rock, Mariah claims “It’s so heavy I can’t lift my arm up!” she jokedto E! News with a great big smile, adding “No…It’s a nice chunk.” Boy does she have high expectations! But then again, her fiance James’s net worth is nearly five billion dollars so its pretty clear that Mariah wanted the ring to end all engagement rings!

Mariah isn’t planning on a long engagement and is hoping to tie the knot with James soon!  As for her wedding, “If everything works out, it will be somewhat soon,” she told the network, clarifying, “I don’t mean if everything works out in that way, I mean there’s a lot that goes into it.” Not only that, she’s already got a dress picked out, sharing “I am very excited about the dress, but I don’t want to talk about it yet, as I have to have my first fitting.” Whoa, she’s only been engaged for a week and already knows what she’s wearing for her wedding? T his lady moves fast!

Unlike her engagement ring, the wedding itself won’t be on a grand scale. This will be the third marriage for both of them and those ceremonies were blow-outs, so this time around they’re keeping it down to family and friends. “We are not doing a big wedding because he did two big weddings, and it’s kind of like, ‘I’ve done a big wedding (too)…We would rather make it beautiful but humble.” That’s so sweet, but notice Mariah didn’t use the word “simple?” Because even though it’s not going to be huge, it will surely be super luxe with only the finest things life has to offer.

HollywoodLifers, do you think Mariah will sneak in a wedding in the next few months?