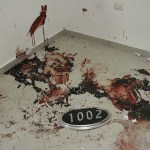 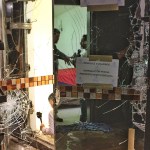 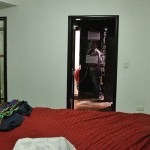 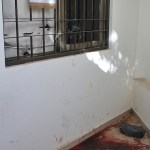 We’re getting a sensational look inside drug kingpin Joaquin ‘El Chapo’ Guzman’s secret hideout in Los Mochis, Mexico, where he was finally recaptured six months after tunneling out of a Mexican maximum security prison. He used yet another tunnel to almost evade authorities again!

Wow! El Chapo, 57, was totally prepared to make a swift getaway Jan. 8 when Mexican marines got into a bloody gun battle at the secret lair where the Sinaloa cartel boss was hiding out. His bedroom featured a hidden door that led to a tunnel through a sewer system so he could make his escape, which initially he was able to do. Five of his henchmen were killed in the shootout while El Chapo and his right hand man initially evaded authorities through his tunnel system only to later be captured.

In case you were wondering why the most powerful drug kingpin in the world looked like a total mess in a dirtied up white wife beater upon his capture, that’s because he took flight through a tunnel that went through a sewer system, ICK! Inside his simple bedroom, which consisted of just a mattress, there was a custom-built secret door concealed behind a large mirror. With the push of a hidden lever, the mirror itself would then open out and lead to a stairway that went down to the underground sewer tunnel.

El Chapo is well-known for the use of tunnels and secret passageways to evade capture. He even had a one mile long tunnel dug underneath the grounds of Altiplano prison where he was being housed after his dramatic 2014 capture on a laundry list of charges. But he sent four of his private engineers to Germany to learn how to construct the tunnel used to break him out in July 2015, which was a huge embarrassment for Mexican authorities.

The cartel leader could have remained free if not for Sean Penn‘s Oct. 2015 interview for Rolling Stone that he not only approved, but sought out! It helped put the DEA and Mexican investigators on his tail to help track his movement that led to his eventual capture.

HollywoodLifers, have you read Sean’s interview with El Chapo yet? What did you think of it?