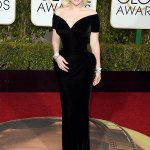 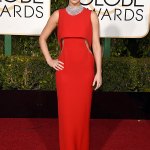 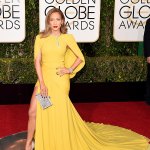 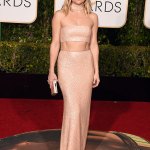 Work it, Natalie Dormer! The ‘Game of Thrones’ star looked like the queen she is in a stunning red dress at the 2016 Golden Globes. She’s too fierce for words!

Not many can work red on the red carpet, but Natalie Dormer sure can. The 33-year-old Game of Thrones star stepped out on the Golden Globes red carpet looking RED HOT! Her dress is total gothic chic. It totally gives you a Game of Thrones vibe, right?

When Natalie walked out on the Golden Globes red carpet, she turned heads. She wowed in a red J. Mendel dress adorned with a sparkling black neckpiece. The straps of her dress were draped gracefully on the sides of her arms. She also wore gorgeous Chanel ring and earrings!

Natalie had her hair pulled back in a messy pony tail and showed off an incredible smoky eye. You work it, Natalie! Both Natalie and her GoT co-star Emilia Clarke reigned over the red carpet.

The actress, who also stars in The Forest, isn’t up for any acting awards this year, but she’s a winner in our eyes. Her show is up for Best Television Series — Drama this year. Game of Thrones will return for its sixth season in April 2016.

In addition to Natalie, so many of our favorite starlets are working it on the red carpet. Jennifer Lopez stunned in a yellow dress. She may be the star of Shades of Blue, but she’s rocking Shades of YELLOW! Jane the Virgin star Gina Rodriguez looked so pretty in a navy satin gown. Check out our best dressed list now!

HollywoodLifers, what did you think of Natalie’s dress at the Golden Globes? Let us know!