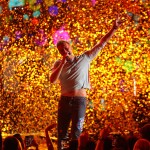 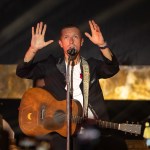 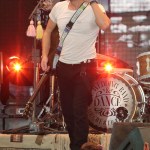 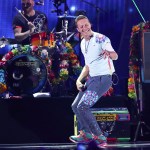 Coldplay will turn up the heat at the Super Bowl! Chris Martin and the rest of the British rockers will take the stage at the 50th anniversary of the NFL’s biggest event when they headline the 2016 Halftime Show on Feb. 7, 2016.

In the U.K., they call soccer “football,” but for one night, England’s native sons Coldplay will gladly use the American version of the word. The band will give sports fans a sudden “rush of blood to the head” when they blow the roof off the Levi Stadium at Super Bowl 50.

Though, is there a roof on the Levi stadium? We’ll find out when we see Coldplay play the Halftime show, as the band will perform in the middle of the NFL’s biggest game, multiple sources tell Us Weekly. Chris Martin, Guy Berryman, Jonny Buckland, and Will Champion will bring their flavor of bombastic rock to the Levi Stadium on Santa Clara on Feb. 7, 2016. After seeing Coldplay debut their new song at the AMAs, we’re sure they’ll turn the NFL’s biggest event into an “Adventure Of A Lifetime.”

Coldplay beat out a bunch of acts who were allegedly interested in playing Super Bowl 50. Britney Spears was reportedly in talks to play the football extravaganza, as were Taylor Swift and even Adam Levine‘s band, Maroon 5. There were reports that One Direction would even postpone their hiatus to turn it up at Super Bowl 50, but it’s a different British band that secured the top billing spot. You can get a preview of Super Bowl 50’s Halftime show by buying Coldplay’s new album here.

However, Coldplay won’t be hogging all of the spotlight. Bruno Mars is scheduled to play the Pepsi sponsored show. Beyonce is also in talks to make a special appearance. Could she possibly top her 2013 epic performance (You know, the one with the jaw-dropping Destiny’s Child reunion?)

While Beyonce doesn’t need a reason to perform anywhere or anytime, it would make sense to see her on stage with Coldplay, as she’s one of the artists featured on Coldplay’s new album, A Head Full of Dreams, according to the Wall Street Journal. Maybe she’ll join them for an epic version of “Hymn for the Weekend.” Wait — seeing Queen Bey play the Halftime show again? Pinch us because we may be dreaming.

What do you think about Coldplay headlining the Super Bowl 50 Halftime show, HollywoodLifers? Are you excited, or were you hoping for someone else?