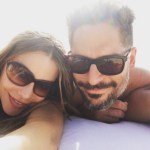 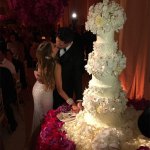 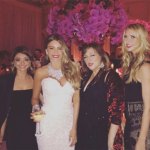 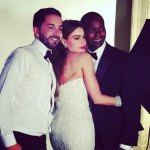 Sofia Vergara and Joe Manganiello have officially tied the knot and we are so excited! We expected nothing less than a beautiful wedding from the two, and Sofia’s wedding ring is so stunning, we are literally in awe! What do you guys think of her ring?

Sofia Vergara, 43, and Joe Manganiello, 38, are officially married and we could not be happier for these two lovebirds! They tied the night on Nov. 22 in the most lavish wedding ever. As if anything could top Sofia’s engagement ring, her wedding ring is even better. What do you guys think of Sofia’s wedding ring?


We never thought anything could top Joe’s proposal to Sofia on Christmas Day, 2014, during their Hawaiian vacation, but their wedding did just that. Aside from the luxurious nuptials, Sofia’s wedding ring was insane. We expected nothing short of breathtaking from the spicy actress, don’t you agree?

Lucky for us, her son Manolo Gonzalez Vergara posted a pic of himself with Sofia and his new stepdad Joe, and BOOM! There is is, right at the bottom of the frame: a big ol’ hunk of diamondy gorgeousness. The chunky band was designed by the infamous jeweler to the stars Lorraine Schwartz, according to E! News, who also attended the nuptials. Manolo seems as thrilled as his mom, captioning the photo “Try not to cry, try not to cry…#SunGlassesSavedMyLife#Jofía #CoupleOfTheCentury#SuchAShameTheyreNotBetterLooking#PapaJoeVol2 #TheWaffle” We would be thrilled too if we were the heir to those family jewels.

Now Sofia has two of the most beautiful rings ever — she is one lucky girl. Mark Keeney, the VP of Marketing for Ritani, tells us that oval rings are quite popular. “It appears to be an oval engagement ring, which is a popular style — especially for large-sized stones. Although there isn’t a good, clear view, it appears to be 4-5 carats, which would put it close to $500,000.” Wow — we can only imagine how much her wedding ring cost!

We are absolutely smitten with the newlyweds and we wish them all the best. We also wish all the best to Sofia’s new bling, which is so glamorous!

What do you think, HollywoodLifers? Do you love her new wedding ring as much as we do?