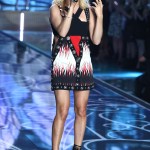 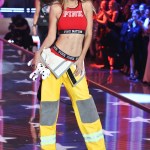 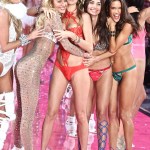 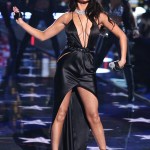 From fresh faces in lingerie on the runway, (hello, Kendall Jenner and Gigi Hadid!), to show-stopping performances from Selena Gomez, the Weeknd and Ellie Goulding, the Victoria’s Secret Fashion Show 2015 was sexier than ever before!

The Victoria’s Secret Fashion Show 2015 in NYC at the Regiment Armory on Nov. 10 did not disappoint. From the sultry Angels to new, fresh faces, show-stopping performances and a $2 million Fantasy Bra, there was so much action on the runway during the sexiest night of the year — and you can get a sneak peek at the stunning show before it airs on Dec. 8 on CBS right here!

Behati Prinsloo, 26, opened the show in a colorful pair of wings and orange lingerie. It was also an extra special night for newcomers Gigi Hadid, 20, and Kendall Jenner, 20, who made their debut on the sexiest runway of the year — and they looked amazing as they strutted their stuff down the catwalk during the opening section, with Gigi in a butterly bustier and Kendall in a corset and fishnets. Earlier in the day, they took to social media where they were all smiles as they prepped backstage before taking the runway by storm.

The gals looked like they had a blast as they rocked the runway in a slew of amazing looks — and nothing was as exquisite as the $2 million Fantasy Bra, which was worn by Angel Lily Aldridge, 29, this year at the glam show.

Along with the gorgeous models were the stellar performances by Selena Gomez, Ellie Goulding and The Weeknd — and the models looked like they had a blast as they moved to the beat of the music. Sels, 23, performed “Me & My Girls” off her new album, Revival, during the PINK section, and she looked just as sultry as the models in a sexy, plunging black dress that put her figure on full display. while Angel Alessandra Ambrosio, 34, came out while the Weeknd, 25, performed. He also performed “Can’t Feel My Face” during the Fireworks segment, which Lily opened in the $2 million Fantasy Bra.

Check out all the pics, (including amazing shots of the performances and models!), SHOP if you want to get the sexy runway-ready looks and be sure to check back for more up-to-the-minute coverage from the Victoria’s Secret Fashion Show.