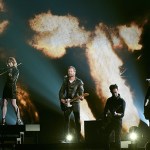 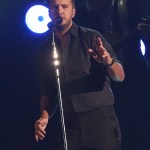 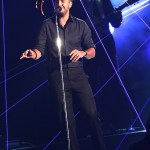 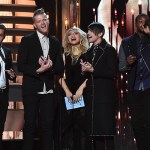 Even Blake Shelton himself knew this was coming! It was no secret that Carrie Underwood and Brad Paisley were going to say SOMETHING about the singer’s divorce from Miranda Lambert at the CMA Awards, and they didn’t hold back. Find out how the hosts addressed the major elephant in the room here!

Blake Shelton, 39, and Miranda Lambert, 31, couldn’t avoid this one! The country stars BOTH attended the CMA Awards on Nov. 4, and it was the first time they were publicly in the same place together since their divorce over the summer — so hosts Brad Paisley and Carrie Underwood obviously had to make a joke about it at the show. Find out what they said here!

During the very beginning of their opening monologue, Brad and Carrie almost immediately started discussing all the big splits of the year. From Ben Affleck and Jennifer Garner, Halle Berry and…what’s his name. And of course, we can’t ignore the breakup that really rocked our world — the one that’s one everybody’s mind. Two people in this very room who we all know and love — Splitsville,” the hosts said. “Look, they’re not even sitting together!”

“Have you heard that duet that Blake did with Ashley Madison?” Brad then asked Carrie, jokingly mistaking the viral dating website for married people for Ashley Monroe, who Blake actually did collaborate  with on the song “We Don’t Have To Be Lonely Tonight” this year. To the tune of the song, Brad and Carrie sang, “We don’t have to be lonely at farmersonly.com, Blake!” Hmmm…too bad he’s dating Gwen Stefani, or we’d have to sign Blake up for that one!

Okay, we knew this one was coming, though — even Blake admitted he was expecting it! “This year’s going to be awkward at the CMAs, speaking of jokes,” Blake told Seth Myers in October. “Because we are…it’s such a family. Everybody there is friends. There’s gotta be one about me and Miranda. Brad Paisley isn’t doing his job if he doesn’t look down there and go, ‘Ha ha!’ You have to address the elephant in the room. We’ve had the conversations like, ‘Okay, dude. I’ll sit there and let you kick me in the face a few times.’ I know it’s coming.”

Awww, the “Sangria” singer is definitely being a good sport about all of this, so hopefully Miranda will be, too. The exes are both friends with Brad and Carrie, so we can imagine they’d understand that the show hosts are just doing their jobs!

Blake and Miranda have seemingly been on okay terms since divorcing in June, but their relationship has really come into the spotlight again over the last few weeks — because things are heating up between the 39-year-old Gwen. She was even seen flying to Nashville with Blake the day before the award show, and just hours before the event began, Gwen’s rep confirmed the relationship! So much going on here…at least Blake and Miranda are able to be professional about it!

HollywoodLifers, what did you think of Brad and Carrie’s comments about Blake and Miranda? Funny…or totally awkward and inappropriate?