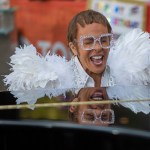 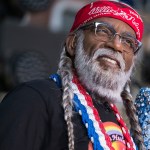 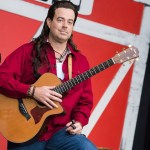 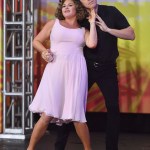 Halloween is here, and the hosts of ‘Good Morning America’ went all out for the occasion! This year, the crew transformed into Cookie Lyon, Ed Sheeran, Donald Trump and more. Click here to see all of the amazing costumes!

When it comes to crafting the perfect Halloween costume, Good Morning America does not mess around! The cast and crew never fail to impress with their elaborate costumes and this year was certainly no different. From Robin Roberts‘ Cookie Lyon costume to George Stephanopoulos‘ Ed Sheeran’s costume, everyone looked incredible! Find out what everyone wore, and check out our gallery for more celebs in their Halloween costumes here!

Every year, the GMA gang dresses to impress for their Halloween special. This year, their outfits were inspired by everything from Empire to The Hulk. First up, Sara Haines and Nick Lachey were Barbie and Ken! They were absolutely adorable. They continued to introduce us to the rest of the GMA crew.

Robin and TJ Holmes STOLE THE SHOW as Cookie and Lucious Lyon from Empire. Robin, Taraji P. Henson would be so proud. George was totally adorable as Ed Sheeran. Lara Spencer went there going as presidential candidate Donald Trump.

It couldn’t be Halloween without an Avengers costume. Ginger Zee burst through a wall as The Hulk! Amy Robach won GMA Halloween by going as Taylor Swift and the rest of her “Bad Blood” crew! Talk about epic! Paula Faris dressed up as Katy Perry, and Rob Marciano and Ron Claiborne were her Super Bowl sharks! Nightline co-anchor Dan Harris went as Harry Potter — always a good choice.

Last year, the GMA crew went all out. Robin went as Queen Elsa from Frozen, Amy was Maleficent, Lara was Prince George and the GMA weekend crew went as One Direction. They managed to top that this year!

What do you think, HollywoodLifers, which of the GMA crew won Halloween this year? What will you be dressing up as? Let us know in the comment below!