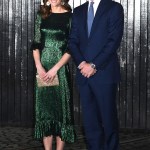 Could the rumors be true, is there another royal baby on the way?! A new report is claiming that yes, Kate Middleton and Prince William have kept a tiny little secret from everyone — they’re expanding their family!

It seems Kate Middleton, 33, and Prince William, 33, wasted no time getting back into the swing of things. The pair whom welcomed Princess Charlotte only a few months ago, have reportedly expanded their family again. A new report claims The Duke and Duchess of Cambridge are going to be parents again.

An official announcement from William and Kate is reportedly coming any day now, according to Life & Style. Why may you ask? Well, according to their new report the couple is pregnant with baby number three. “They’re expecting”, a royals insider told the outlet. “It happened far quicker than they expected — they’d just started trying for another child. But William and Kate are so excited.”

“Friends are saying the baby will arrive around June. They say Kate is at the very beginning of her pregnancy and won’t show any sign of a bump until next year. She still looks extremely slim,” states their source. That’s not all. She reportedly has been showing other signs — like major food cravings. “She’s having funny food cravings. She’s been eating very spicy curries and pizza with piles of chili flakes. When she was expecting George and Charlotte, she developed the same taste for hot foods.”

The good news is, she isn’t feeling sick. That could be because she’s not pregnant or the fact that she may get the crazy morning sickness she usually has this time. “So far, she’s not feeling sick,” the insider added. “At the moment, she’s glowing. Kate does worry she will suffer from morning sickness again, but it wasn’t as bad with Charlotte as it was with George, so hopefully it will be less extreme this time.”

It’s hard to imagine that Kate and William didn’t waste any time expanding their family again, but we will just have to wait to see if an announcement will be made in the near future.

HollywoodLifers — what do YOU think about the report? Sound off below!