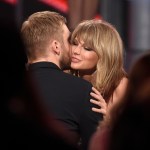 Oh man — do NOT mess with Calvin Harris! The DJ took to Twitter to totally shoot down rumors that he and Taylor Swift have split up, and his sassy response to allegations that he got a ‘happy ending’ at a massage parlor is SO epic. See it here!

Are Taylor Swift, 25, and Calvin Harris, 31, headed for Splitsville?Not according to his latest tweet! The 31-year-old has been subject to some pretty harsh rumors this week, and he wants us all to know the TRUTH — but he didn’t do it without hilariously slamming the fake stories on Twitter.

Over the summer, Calvin was photographed leaving a Thai massage parlor that’s reportedly known for giving ‘happy endings,’ and this week, it was reported that the 25-year-old broke up with him over it! But, relax, it looks like both the happy ending and split are TOTAL rumors.

“It’s not going to be a ‘happy ending’ for everyone I sue for defamation of character for all these bull**** stories bye bye,” the DJ wrote on Twitter on Oct. 12. And the “Wildest Dreams” singer made sure to show her support by favoring the tweet just minutes after her man posted it. Got that, people!?

As HollywoodLife.com previously reported, distance has been a bit of a problem for this hot couple in their romance lately, but that doesn’t mean they’re ready to throw in the towel! In fact, Taylor already has big plans to invite Calvin to her family’s Thanksgiving dinner, and is already eagerly looking forward to ‘devoting’ herself to him when the 1989 tour ends in December.

“Taylor wants a work-life balance, and right now, it’s all about her work, which she loves,” an insider told us EXCLUSIVELY. “But when she’s done with this tour, she wants to devote herself to the other things in her life again: To being with her family, her friends and with Calvin.” Aww…we can’t wait for them to be able to have some time together!

Click to buy Calvin’s song How Deep Is Your Love

HollywoodLifers, what do you think of Calvin’s tweet? Do you believe things are going well in the relationship?