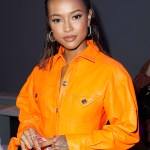 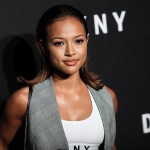 Ouch! Karrueche Tran got her wisdom teeth pulled on Sept. 21, and it looks like the surgery took a toll on her poor mouth. She was spotted shopping at a drug store following her surgery with some awfully puffy cheeks! But of course, she still managed to look fabulous otherwise!

Being a model, it’s hard for Karrueche Tran, 27, to look bad no matter what she may be going through. After getting her wisdom teeth out on Sept. 21, she went makeup free to let her swollen cheeks heal — and although she seemed like she was going through some pain, Karrueche’s fresh face and flattering outfit proved that pain can’t keep her from looking amazing! See pics below!

Karrueche stopped by a Rite Aid following her surgery, holding tissue to her aching mouth. Her cheeks were all puffed up, but she still rocked a pair of tiny black athletic shorts and a low-cut long sleeved crop top. Plus, Karrueche isn’t one to need much makeup anyway, so her bare face was just as flawless as ever! Who knew someone could still look hot even with swollen cheeks? Click here to see more of Karrueche’s post-surgery pics!

Prior to getting her wisdom teeth removed, Karrueche tweeted her dread for the surgery with a funny video of a little boy screaming. She also told her fans to follow her on Snapchat, insinuating that she’d be snapping her post-surgery delirium. And on her way home from the drug store, Karrueche posted a hilarious video on her Instagram doing just that!

Me after my wisdom teeth were taken out today lmao If you guys need an awesome dentist go see Dr. Brian Reich in Brentwood 310 472 6001

It’s great to see that Karrueche can be in good spirits after going through some major pain! We’re also happy to see her joking around when she’s right in the middle of another Drake and Chris Brown feud. Just a day before Karrueche had her surgery, Drake released a mixtape with Future which features a song that makes a direct reference to Karrueche! Maybe this was the perfect time for Karrueche to get her wisdom teeth pulled — so she has something to take her mind off the drama!

HollywoodLifers, YOU think Karrueche still looked amazing despite her puffy cheeks? Did you think her video was funny? Tell us below!