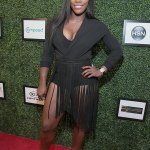 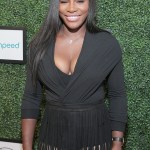 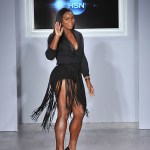 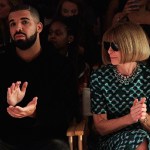 Serena Williams was all smiles at NYFW just days after losing in the U.S. Open Semi-Final, as she unveiled her Spring 2016 collection in a wildly sexy fringed dress that bared her beautiful legs. And, her boyfriend Drake was front row beaming with pride!

Serena Williams, 33, may have lost in the U.S. Open Semi-Final, but she dominated New York Fashion Week! The tennis star debuted her “smash hit collection” on Sept. 15, and also took the catwalk by storm in a sexy cleavage-baring dress as her beau Drake, 28, cheered her on from the front row. Talk about a grand slam!

Serena is one multi-talented lady, and she continues to amaze us! Her Spring 2016 collection featured a ton of boho fringe-detailing with a sexy touch. The star herself came out on stage at the end of the show wearing a stunning piece from her collection, a black fringed skirt with a sexy low cut top that put her cleavage and enviable legs on full display! Vogue‘s contributing editor, Andre Talley, called Serena’s designs a “smash hit collection.” We couldn’t agree more!

Serena debuted her collection in front of a star-studded audience. Drake sat front row at her catwalk show next to Anna Wintour, while models Gigi Hadid and Lily Aldridge were also there to support her skyrocketing fashion career. Two of Drake’s songs, “Back to Back” and “Hotline Bling,” were even featured in the show, according to the New York Times.

After the show, Drake and Serena shared an adorable moment backstage. The rapper embraced the star of the show in a sweet and supportive hug! So cute. Though Drake and Serena haven’t commented on their relationship status, it sure seems like there are sparks flying! The “Charged Up” rapper also came out to cheer her on in the U.S. Open. Unfortunately, she lost to Roberta Vinci, 32, but this time it seemed like it was a big win for Serena all around.

Serena and Drake hugging it out at Serena Williams’s fashion show 💕 pic.twitter.com/Lage8YHsya

What do YOU think, HollywoodLifers? Do you like Serena’s sexy fringed dress? Do you think she’s dating Drake? Tell us your thoughts below!