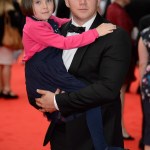 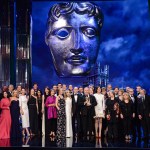 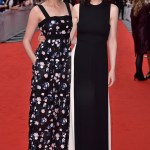 PBS’ hit show ‘Downton Abbey’ may be ending, but that didn’t stop the stars from looking fabulous! Lily James, Laura Carmichael and more gathered for a BAFTA event honoring the series, and their attire was on point. Get the details on the gorgeous looks below.

As the final season of Downton Abbey wraps up shooting, the cast and series were honored by BAFTA at the Richmond Theatre in Richmond, England, on Aug. 11. Everyone from Michelle Dockery, 33, to Lily James, 26, was there to celebrate the show’s six seasons, and they absolutely blew us away with their beautiful looks!

The ladies were the showstoppers at the event, all wearing long dresses that stuck to a black-and-white palette, with some donning classy embellishments or florals. Michelle was the frontrunner of the black-and-white theme, with a two-toned Valentino Fall 2015 gown and adding a pop of color with bright red lipstick. Lily, who stunned us plenty of times while promoting Cinderella, opted for a more mature look in a white Ulyana Sergeenko Fall 2015 Demi-Couture dress and Christian Louboutin heels. Also dressing in white was Joanne Froggatt, 34, in a Victoria Beckham gown, which gave us the biggest surprise of the bunch with a fun embellished back.

Laura Carmichael, 29, and Sophie McShera, 30, added a sweet feminine touch to the night’s minimalist vibe with floral dresses, Laura in Erdem Resort 2016 and Sophie in Nicholas Oakwell Couture. These ladies all looked so incredible, it’s hard to choose which look we like most!

BAFTA held the event to honor Downton Abbey for the impact it has had in its six seasons, as well as all of the awards it has won. Before the show’s final episode airs in December, we think the stars deserve to be recognized for their impeccable style as well!

Which actress do you think had the best look at the BAFTA Downton Abbey event? Vote in our poll and tell us below!