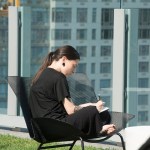 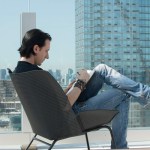 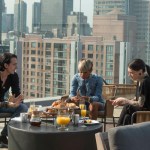 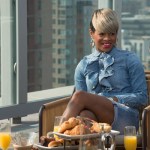 Project Runway is finally back for the 14th season and we couldn’t be more excited! If last night’s episode is just the beginning of what’s to come, then we don’t know if we’re ready! What’d you think of the season premiere?

Finally, the moment we’ve all been waiting for, Project Runway is back! Last night’s episode was the season 14 premiere and we have so many thoughts, we don’t even know where to begin. What did you guys think of last night’s episode?

Heidi Klum started off the show saying, “We have so much fun this season. Most importantly we have fashion that inspires us.” Tim Gunn followed up with, “fashion that excites us,” while Heidi did a funny face as she said, “and some fashion that scares us…”

Let’s get down to business. All of the designers introduced themselves and we have never seen such an eclectic crew. All 16 of the designers headed to Madison Square Garden in NYC and there were our old friends, Heidi, and Tim, standing in the center of the basketball court.

When Candice Cuoco first saw them she freaked out and said, “If I were to arrive at the gates of heaven, this is exactly what it would feel like.” Wow, how sweet is that?

Gathered around the arena, were all different colored fabrics draped over the seats. The designers had 3 minutes to “metaphorically shop” and grab fabrics, but they could only take 4 textiles each. The challenge was: Create a look that shows who you are as a designer.

Once they got the green light to pick their fabrics, all hell broke loose and the designers ran around the arena grabbing whatever they could get their hands on while being pushed and shoved out of the way. At one point, they were actually fighting each other and grabbing fabrics out of each other’s hands — whoa.

Once everyone returned to the workroom, Tim was pissed. He told everyone before the show started that they had to bring their own personal tool kits to use while they were there. “Something completely unprecedented has happened,” he said. “Three of you: David, Swapnil, Merline, brought nothing. I have to tell you, I am absolutely incredulous. How could this be? It’s like going on a camping trip and not bringing any toothpaste or shampoo.” Uh oh — it looks like this season is already starting off on the wrong foot.

The runway show was anonymous and the special guest judge was Sports Illustrated cover model and the host of Project Runway Junior, Hannah Davis.

Surprisingly, the runway show was amazing and we loved a lot of the looks, except for Hanmiao Yang’s yellow satin potato sack and Duncan Chambers-Watson’s ruched peach satin maxi dress which looked like a worm.

Our fave dress was Ashley Nell Tipton’s yellow floral maxi dress, and it was obv the judges’ fave too, because she was the winner of the challenge, while Duncan (Mr. Worm), was the loser and was sent home.

Wow, what a crazy first episode — we don’t know if we’re mentally ready for a full season — are you?