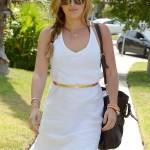 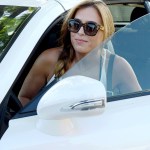 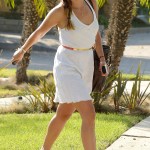 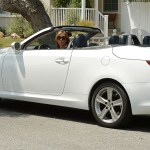 Although Ben Affleck is denying all allegations of an affair with Christine Ouzounian, the former nanny claiming otherwise. Christine reportedly told her friends that she and Ben were ‘intimate’ before Jennifer Garner found out and fired her.

The rumors of Ben Affleck‘s, 34, alleged romance with his former nanny are running rampant all thanks to the woman he was reportedly involved with. Christine Ouzounian, 28, allegedly revealed details of her relationship with Ben to close friends. Friends of the 28-year-old say Christine reportedly told them she and Ben got “intimate” in the Bahamas before she was fired by Jennifer Garner, 43.

What started out as innocent flirtation quickly turned into something more, according to Christine’s friend. The confidant went on to explain to E! that Ben and Christine’s professional relationship turned romantic when the two started to hang out more. “…Eventually she couldn’t contain her excitement and spilled the beans that she was dating Ben Affleck…she told her friends she was completely in love with him,” the former nanny’s friend said. “Ben told Christine things that led her to believe they were going to be fully together. Over the course of the last few months, their relationship became very real and serious to Christine.” While Christine continued to be the caretaker to Ben and Jen’s children, the 43-year-old actress couldn’t help but feel suspicious of her nanny.

That was when things apparently went downhill for Christine. The friend revealed that the 28-year-old allegedly said she wasn’t fired until Jennifer “found out that Ben and Christine had been intimate” during their trip to the Bahamas. That was when Jennifer supposedly had enough and severed professional ties with Christine. Even though the former nanny was fired from her job, that wouldn’t be the last Jennifer heard from Christine.

After the family trip to the Bahamas, Ben reportedly asked his former nanny to accompany him on a flight back to Los Angeles, Calif. But before they even arrived to LA, Ben was able to convince Christine to go to Las Vegas, Nevada with him for a poker tournament. When the pair finally touched down in LA, Jen flipped out. “She fired Christine right away and Ben did nothing about it,” a source EXCLUSIVELY told HollywoodLife.com. “Christine’s upset and has met with attorneys to file a wrongful termination suit against Jen.” Things are just continuing to get messier between Ben, Jen, and Christine.

What do you think, HollywoodLifers? Did Christine and Ben really get intimate in the Bahamas or is the former nanny just making up stories?