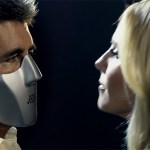 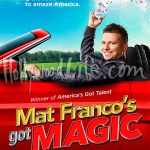 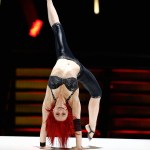 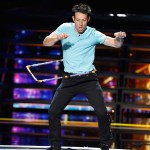 Well, that was unexpected. On week 10 of ‘AGT,’ three nerdy college boys proved you can’t judge a book by its cover after delivering an impeccable performance — perfectly paying homage to Ariana Grande.

We sure hope Ariana Grande, 22, has the July 28 episode of America’s Got Talent saved to her DVR. Because she’ll definitely want to check this out: unconventional boy band, Triple Threat, taking a stab at her hit, “Problem” and absolutely killing it. Heidi Klum, 41, Mel B, 39, Howard Stern, 61, Howie Mandel, 59, and even guest judge Marlon Wayans, 43, were all stunned. Click inside to watch — and to see what other acts knocked the socks off the judges!

While any song by Ari is tough to take on (um, hello eight octave vocal range!), the young men of Triple Threat rose to the challenge. Inclusive of perfect harmonies, ridiculous riffing and yes, even a rap, their talent left the judges in awe — especially Marlon.

“Y’all three nerdy white guys and you come on stage and start singing like some soulful brothers,” the actor raved. “Dope. Great.” Dope and great, indeed. Much to our delight — and Arianators everywhere — these guys made it through to the next round. *insert clap hands emoji*

As always, 20 acts performed but only 7 could be pushed through to the live shoes at Radio City Music Hall in NYC. The first to earn their keep? Ventriloquist, Paul Zerdin. The handsome 42-year-old served up a hilarious dialogue between himself and a baby puppet. Odd. But ah-mazing.

His set really blew Marlon away. So much so, that he pressed down on his Golden Buzzer — sending Paul straight though to the shows in the Big Apple! “I was laughing and I felt joy,” the White Chicks star explained of his choice. “You made me feel like a kid again. I love comedy and I love joy and I love that feeling, so that’s why I pushed down on this Golden Buzzer.” Congrats!

And then? Mountain Faith Band, a bluegrass band made of five family members who rocked the house with a country version of The Darkness‘ 2003 smash “I Believe In A Thing Called Love.” “There’s not doubt that you make everybody happy,” Mel gushed. “I just want to assure you that you are really, really good at what you do.” Obvi, they got four yeses and the opportunity to move on.

Oz Pearlman, a mystifying mentalist, Vita Radionova, a sexy contortionist, Animation Crew, a quirky dance troupe and Benton Blout, a jaw-droppingly good singer were also able to advance in the competition after giving it their all.

Catch America’s Got Talent Tuesday nights at 8 p.m. on NBC.

HollywoodLifers — what was your favorite moment from week 10 of AGT? Let us know your thoughts!