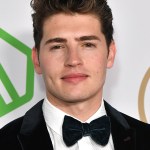 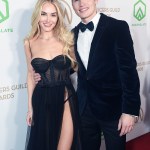 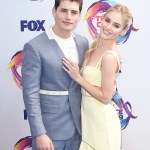 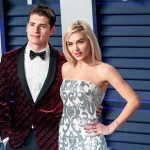 This just might be the best thing you’ll see today — or maybe ever. Yes, we’re talking about a half-naked, wig-wearing Gregg Sulkin dancing. And yes, he’s bringing all the boys to the yard. And yes, you just read that all correctly.

Faking It actor, Gregg Sulkin, 23, is clearly giving it all he’s got as he competes on Spike TV’s Lip Sync Battle with a sexy, shirtless rendition of Kelis‘ 2003 hit “Milkshake.” The hunky Brit puts his hot bod to good use, stripping down to nothing but jeans and leaving us feeling more #blessed than ever. Click inside for a preview!

“Here’s a sneak peak of my performance @spikelsb @spiketv@chrissyteigen who’s tuning in 7/30?!#AlwaysAwkwardToDoThatToAFriend#FilmedAlongTimeAgo,” he wrote alongside the video in a July 24 Instagram post. Check out the 15 seconds of *pure magic* below and see what we’re talking about:

Here's a sneak peak of my performance @spikelsb @spiketv @chrissyteigen who's tuning in 7/30?! #AlwaysAwkwardToDoThatToAFriend #FilmedAlongTimeAgo

The MTV star’s backup dancers totally read our minds at the start of the clip when they decided that ripping off his clothes was a great idea. While your eyes might want to stay glued to his 6-pack abs, just try and look up. Because you won’t want to miss his impeccable lip syncing skills. Or the major twerk action going on behind him. Or even show host, Chrissy Teigen‘s amazed expression at everything that’s going on around her.

Bella Thorne Reveals What She Loves About Boyfriend Gregg Sulkin

While we 100% approve of Gregg’s Kelis-inspired striptease, we’re just a bit curious as to how his lady love, Bella Thorne, 17, feels about it. If we had to guess, we’d say she’s totally cool with it.

When asked to give one reason why she’s so head over heels for Gregg, the former Disney darling gave a very sweet response. “There’s so many things. It’s hard to name one,” she gushed to HollywoodLife.com EXCLUSIVELY at the Crocs Funway Runway in NYC on June 23.

HollywoodLifers — how do YOU feel about Gregg’s performance of “Milkshake” by Kelis? Let us know your thoughts!