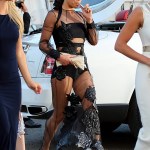 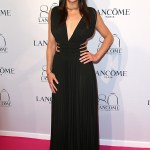 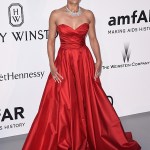 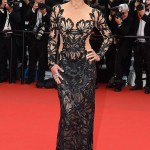 Sheer seemed to be the theme of the night, as both Michelle Rodriguez and Jessica Stam rocked see-through dresses as they stepped out for the Leonardo Dicaprio Gala — who really owned the trend? VOTE!

Celebs have dared to bare in see-through looks for quite some time on the red carpet — and judging by Michelle Rodriguez and Jessica Stam‘s latest looks, the trend is certainly here to stay. In fact, both stars found themselves in a sheer showdown as they sported similar sexy looks, both by designer Francesco Scognamiglio, at the 2nd Annual Leonardo Dicaprio Foundation Gala at Domaine Bertaud Belleu in Saint-Tropez, France, on July 22.

Michelle sizzled in a long-sleeved black sheer gown as she stepped out in her revealing dress, which featured flowers along the hemline of the frock. The actress rocked the ensemble with a pair of high-waisted black briefs, which were completely visible in the ensemble. She pulled her hair back in a ponytail, which kept the focus on the sexy dress.

While Michelle opted for a dark take on the sheer trend, Jessica wowed in a see-through version which featured white detailing strategically placed around the chest, which barely kept her assets concealed. The star wore nothing more than a pair of black underwear under the ensemble — she took the trend to an entirely new level and her frock was definitely more revealing than Michelle’s.

Both Michelle and Jessica looked amazing in their sheer styles, but this is a tricky trend we wouldn’t recommend trying at home — rocking a sheer dress from head-to-toe is very daring. If you want to try the look, a sheer shirt coupled with a lace bandeau would probably be your best bet.

Who do you think pulled off the sheer trend better, Michelle or Jessica? Check out their looks and VOTE.