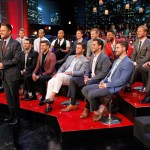 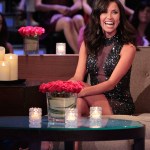 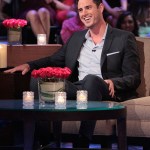 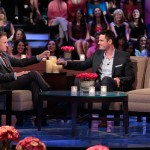 Apologies, confessions and seriously awkward encounters? Yup, sounds like ‘Bachelorette: Men Tell All.’ What about standing up to bullies? Because that happened too.

When The Bachelorette men get together to tell all their secrets, you know you can expect a few things: tears, drama, and well . . . a man on his knees? That’s what we got when Chris Harrison brought out Ben H., Ben Z., Chris “Cupcake,” Clint, Cory, Corey, Ian, Jared, JJ, Joe, Jonathan, Joshua, Justin, Kupah, Ryan M. and Tanner . . . and of course, Kaitlyn Bristowe. Allow me to break it down for you.

Here are the highlights of what you missed on Bachelorette Men Tell All:

Ian gets down on his knees.
Right off the bat, Tanner called out Ian for bashing not only Kaitlyn, but also bashing the guys when he left. His best line: “Princeton needs to teach a class on how to not be an a–hole.” When Corey chimed in to “defend Ian” and say that he wasn’t happy with how Kaitlyn was The Bachelorette, our main man Ben H. jumped in, to defend her and say he was thrilled she was his Bachelorette. Oh and then Chris gave Ian the chance to apologize, so he got down on his knees to do so. It was creepy. He later also got down on his knees again to apologize to Kaitlyn, and she accepted (somehow).

Clint and JJ: WTF?
As for the villains who had to vill, Clint started by saying he is straight and was there for Kaitlyn, but he hung out with JJ because they got along well and he found him “interesting.” JJ spoke up too, saying the “villian sh-t” was all fun and games, and that when they would talk for “four and five hours,” because they were “intellectually curious about each other.” I’m using a lot of quotes, since he was using air quotes for really random things. However, for the most part he cleared everything up — and came out on top, when Corey wasn’t interrupting. Seriously Corey, no one even knows who you are.

Ben Z. & Jared, Broken
Basically, seeing both Ben Z. and Jared again gave us (and all the ladies is the audience) all the feels. Ben admitted that he still hadn’t cried — yes, it’s been over 11 years. He also said the game changed in Ireland during the group date when she played dead. He lost his mother at age 13, so . . . that makes sense that he was turned off and shut down a bit. He also admitted that he was definitely in love with her. Jared too, came out and said he was crazy about her. Luckily, you can see him on BiP (two nights a week).

Ben H. Felt Like An Outsider
I hope you have your tissues ready. The girls went NUTS when Ben H. took the hot seat, and we get it. He broke down the moment it all changed: Kaitlyn had snuck down to the room that he shared with Shawn — the three of them spent six hours off camera. However, when Ben went to shower, he could tell the difference when he returned: that was when she told Shawn he was “the one.” And ladies, no Bachelor announcement had been made yet.

Kaitlyn Stands Up To The Hate

Right off the bat, Chris Harrison brings up the issue of hate that Kaitlyn is receiving over her choices on the show. She explained that she can handle it, but it is hard, and it’s even worse to deal with her family having to see it. With that, Chris did something brand new, and read three extremely graphic and mean messages that she received, which included words like “whore” and “slut.” Kaitlyn even said that one of them was actually a MOTHER. The only problem I had with the segment was the blurring out of the Twitter handle — the people wanted to put that horrific message out there, they should know it’s not ok.

Alright, after the PSA, let’s get back to the men. Kaitlyn chatted with the men: mostly Ben H., asked her why he told Shawn about Nick, and not anyone else. With that, she said she felt a “responsibility” with Shawn. Hmm. Chris also asked about Nick, and their past relationship. She admitted she did joke to him before the show about getting out of the limo, but never thought he’d show up. JJ chimed in, supporting her that she clearly had something with Nick.

The show wrapped with a few highlights: Ryan finally admitted he was wrong for getting wasted, and brought her a rose; she asked Clint why he didn’t treat her the way he treated JJ; and Ian brought up his final note to Kaitlyn. Apparently he gave her them each week. Again, he got on his knees to really apologize for being well, a jerk. Also, Joe dressed up as a bird to scare her.

Did you enjoy that whirlwind that was The Bachelorette: Men Tell All?