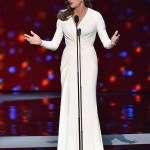 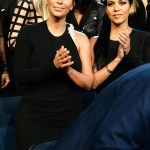 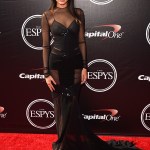 It’s a red hot style showdown, as both Rachel McAdams and Lea Michele sported nearly identical outfits, donning red suits with nothing underneath their blazers. Who do you think pulled off the sexy menswear trend better? VOTE!

What better way to rock the red carpet than in a red hot look? That’s exactly what two stylish stars did this week — and they served up a sizzling take on the menswear trend as they donned blazers without anything underneath. If you’re going to dare to bare, take a tip from Rachel McAdams and Lea Michele!

Lea, 28, was the first to sport the sexy style when she arrived at the EW party at Comic-Con in San Diego on July 11, opting for one of my favorite designers, Zuhair Murad. Lea is honestly one of my favorite fashionable females on the red carpet, and this daring look is exactly why I can’t get enough of her style — she always keeps us guessing! After rocking a sweet, striped crop top and matching circle skirt she added a little edge to her look with this outfit, as she also put her long legs on full display — this is a sexy summer suit done right!

While Lea totally owned the look, she wasn’t alone! Mere days later Rachel, 36, stepped out at the ESPY Awards in LA on July 15 with her Southpaw costar, Jake Gyllenhal on her arm, but it was her red hot pantsuit, (sans shirt!), that totally had us doing a double-take. While she often dressed sweet and chic, she isn’t afraid to show off her sexy side — and that’s exactly what she did in this outfit!

I love how both stars really made this trend their own. While Lea’s version featured embroidery and was a bit more youthful, Rachel opted for a sleek and chic take on the trend. Sure, both stars totally dominated the look in their own way, but who do you think wore it better? Check it out right here and be sure to VOTE — and gals, be careful if you plan on trying this look at home.