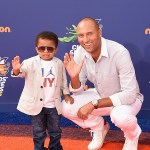 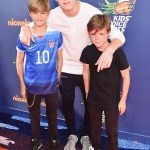 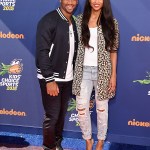 Brooklyn Beckham may have just won the award for best big brother ever! The eldest Beckham offspring acted as a doting big bro as he took younger brothers Romeo and Cruz to the Nickelodeon Kids’ Choice Sports Awards on July 16.

What else are big brothers for? Looks like David, 40, and Victoria Beckham, 41, no longer have to chaperone events for their kids because they have Brooklyn, 16, to look after the little ones! The Beckham brood all cooly posed for cameras as they showed up to the Nickelodeon Kids’ Choice Sports Awards without their parents and they rocked it!

All those years of posing alongside their parents on the red carpets sure paid off! Brooklyn and his little brothers Romeo, 12, and Cruz, 10, owned the red carpet at the Nickelodeon Kids’ Choice Sports Award on July 16. The adorable trio showed up in casual outfits and put on their best mugs for the camera. Brooklyn kept it simple with a white henley and black pants while Romeo rocked a blue jersey and Cruz showed up in all black everything — pretty classy for a 10-year-old!

The oldest Beckham boy showed love for his younger siblings as he posed with his hands draped over both of their shoulders. What a loving group of siblings! Later down the carpet the trio was joined by Hope Solo, 33, who posed for a few pictures with the boys. That’s one celeb Brooklyn can cross of his list, we all know how much he loves taking pictures when he meets celebs!

Brooklyn Takes His Brothers To The KCAs

The Nickelodeon Kids’ Choice Sports Awards wasn’t the first award show Brooklyn took his younger brothers to! Back in late March, the caring older brought brought Romeo and Cruz to the 2015 Kids’ Choice Awards without their parents! The eldest Beckham may only be 16, but it’s safe to say his parents definitely trust Brooklyn enough to allow him to take his brothers to such high profile events!

HollywoodLifers, is Brooklyn the sweetest older brother or what?!