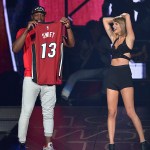 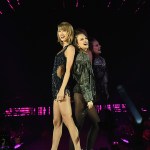 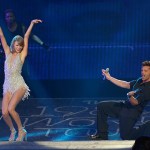 Taylor Swift is just keeping the surprises coming! For the second Washington D.C. stop on her 1989 tour, the singer gave fans an extra special treat by bringing Jason Derulo on stage for a duet performance of his hit ‘Want To Want Me’ — but even SHE was shocked when he ripped his shirt off!

If the 1989 tour hasn’t hit your city yet, you better get a ticket NOW! Taylor Swift’s, 25, surprise guests have been KILLING it lately, and it was no different at her Washington D.C. show on July 14. This time, Jason Derulo, 25, joined the blonde beauty on stage for an epic performance of his new hit “Want To Want Me.” Watch it here!

Jason and Taylor completely commanded the stage for their duet, but he definitely stole the show toward the end, when he ripped his shirt off and tossed it to the side! Even the “Bad Blood” singer didn’t see that one coming, and had a completely shocked, yet super excited, expression on her face as them moment unfolded.

“I got to sing my fave summer JAM ‘Want To Want Me’ with @jasonderulo in DC-I’m also loving his new single ‘Cheyenne,'” Taylor wrote on Twitter after the show ended. And Jason was just as excited, gushing, “Last night was so fly @taylorswift13 ! Thank u 4 having me join the party luv!”

Taylor has really been delivering when it comes to surprise guests recently. For the first night of her two D.C. shows, the 25-year-old performed with her BFF Lorde, who flew all the way from New Zealand to be part of the show! And for two New Jersey shows over the weekend, The Weeknd and Nick Jonas showed up to sing their hits. Definitely not too shabby.

HollywoodLifers, tell us: What do you think of Jason and Taylor’s performance? Who do you think she should bring out as her next guest?