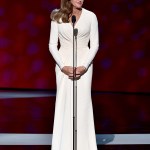 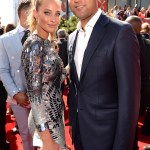 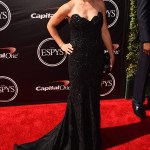 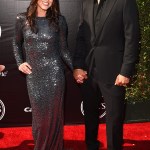 Oops, she did it again! Britney Spears showed up to the 2015 ESPY Awards and clearly stole the show. The mother-of-two looked all sorts of amazing in her flashy outfit!

Britney Spears, 33, still has it. The sexy hit-maker rocked the red carpet at the the Microsoft Theater for the 2015 ESPY Awards on July 15. Her outfit was one of the sexiest looks of the night!

Step aside, it’s Britney, ESPY Awards! The blonde bombshell showed up on July 15 looking all types of fierce. She rocked a very sexy plunging sequin dress.

The “Pretty Girls” singer showed up wearing a killer short silver dress that was adorned with silver sparkles. The bottom half had a black beaded fringe that hung just above her knees. The back was super sexy, as it left little to the imagination.

Brit-Brit kept her accessories minimal and just rocked a sexy pair of black strapped heels. This was the perfect choice for her body. She kept her hair down in loose barrel curls that hung passed her shoulders. Seriously, she can do no wrong!

Brit-Brit is no rookie when it comes to award show fashion. The icon also flaunted her stunning figure for the 2015 Billboard Awards. She rocked a stunning Yousef Al-Jasmi dress, that featured sparkly long sleeves. And, of course, Britney had to show off her sexy back!

We can’t wait to see her hit the stage and present tonight!

HollywoodLifers — what did you think of Britney’s look? Sound off below!