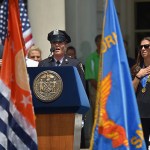 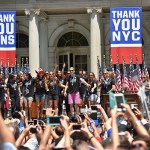 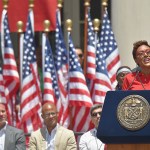 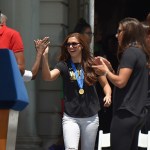 What a day for a parade! New York City gave the US Women’s National Soccer Team a hero’s welcome on July 10, honoring their 2015 FIFA World Cup victory with a huge celebration! As fans showered Team USA with praise and confetti, NYC Mayor Bill de Blasio awarded them the keys to the city!

The US Women’s soccer team was beaming with pride — for good reason! They won the 2015 Women’s World Cup! Carli Lloyd, 32, Hope Solo, 33, Abby Wambach, 35, and the rest of Team USA were honored with a parade in The Big Apple. Thousands of soccer fans, including NYC Mayor Bill de Blasio, 54, were there to congratulate the US Women for their amazing win!

The US women will be picking confetti out of their hair for days. The July 10 celebration was filled with the stuff, as fans were ecstatic to see the World Cup champions travel through Manhattan. The event ended in the front of NYC’s City Hall, where Mayor de Blasio bestowed the honor of the Keys to the City to each member of the team.

Abby delivered her gratitude for the honor. “I can’t even thank you enough for giving us this experience,” she said to the mayor, before calling this day, “the best thing that I have ever been a part of in my life.” Abby also said she, and the rest of the team, was incredibly thankful for all the fans who supported them throughout their entire World Cup run.

The parade began at the Alexander Hamilton U.S. Custom House near Broadway and Battery Place. The women travelled up Broadway, through the part of New York City called the Canyon of Heroes. How fitting! These women are heroes of the US soccer world, securing the first World Cup victory in 1999.

Though the parade took place on July 10, the celebration began right after the final minute of the July 5 game. Some of the biggest celebrities hit up social media to celebrate the US Women’s victory, including President Barack Obama, Beyonce, Ellen DeGeneres, Justin Timberlake and so many more!

What did you think about the parade, HollywoodLifers? Leave your own congratulations to the US Women’s team below!