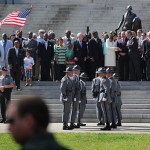 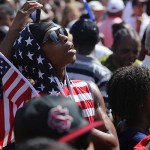 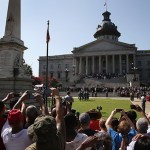 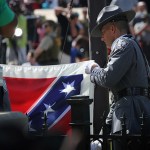 After 54 years, the Confederate flag was taken down from its pole in front of the South Carolina statehouse in a moving and historic ceremony. The hotly debated decision to remove it came after the tragic, racially-motivated massacre of nine members of the Mother Emanuel A.M.E. Church.

It’s been a long time coming. For over half a century, the Confederate flag flew in front of the South Carolina statehouse, but on July 10 it was taken down during a flag removal ceremony attended by thousands. Now, the flag synonymous with hate, will no longer be allowed to fly on that flag pole in the state of South Carolina.

What a historic moment for the nation. Thousands came out for the Confederate flag removal ceremony in South Carolina on July 10. Honor Guards were present to bring the flag down via a motorized pully to the cheers of a mostly excited crowd. While there were a few people at the event waving smaller Confederate flags to show their unwavering allegiance to the symbol, they were overshadowed by the tearful and happy individuals who were there to show their support for Governor Nikki Haley‘s decision.

The decision was made when Dylann Roof, 21, opened fire and killed nine African American members participating in bible study at Emanuel African Methodist Episcopal Church in Charleston, South Carolina, on June 17, it was believed to be a hate crime. Once his online manifesto was discovered, the image that was heavily featured throughout was of the Confederate flag. Since then, a movement began to take action to bring the symbol down.

The bill, which was signed by Governor Haley on July 9, was proposed by democratic senator Vincent Sheheen. In his bill, he proposed that the flag no longer be permitted to fly in its current position, 30 feet in the air, hanging from a pole in front of the Statehouse. From then on, the proposed bill took off to the house after the final Senate vote of 36-3 on July 7. After a very heated debate over the flag, which flew on statehouse grounds since 1961, and passing through the General Assembly with two-thirds majority vote, the proposal made its way onto Governor Haley’s desk.

On the evening of July 9, Governor Haley signed the bill to remove the symbol from the grassy lawn of the South Carolina statehouse. “May we never forget the actions that those people took to get us to this point today,” the governor said of the recent tragedy that sparked this historic move.

Are you happy to see the flag go, HollywoodLifers?